Yet another 5* victory for Steve Guerdat! 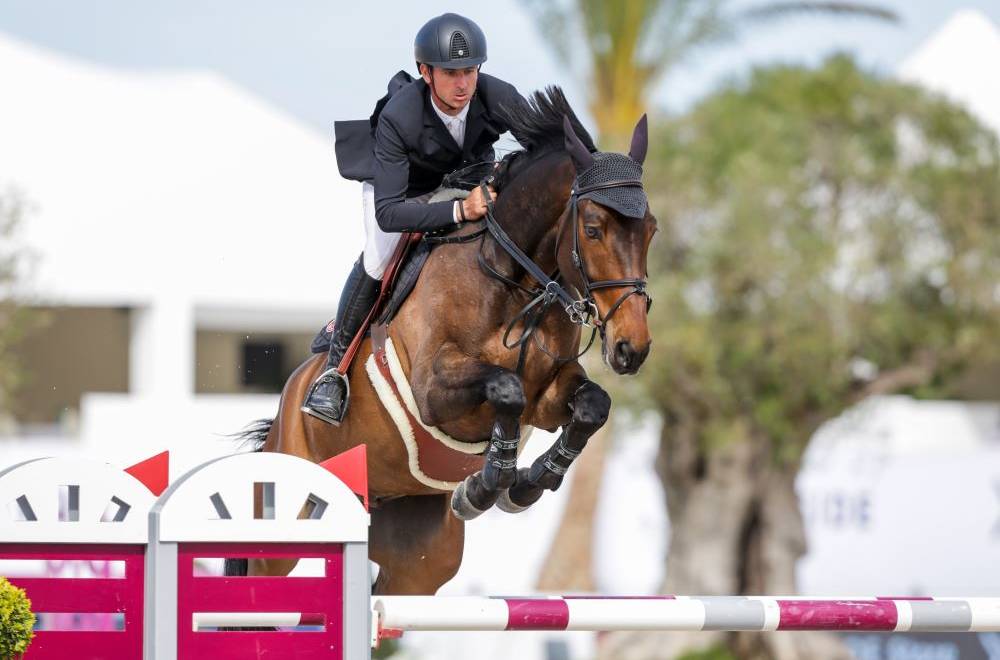 The first outdoor CSI5* in Europe this weekend was held once again in Grimaud which during these difficult times remained the place for high level CSI in Europe.

Forty-six of the world's best pairs started in the Grand Prix of this first European outdoor CSI5* of the season, the only one to be held in the world this weekend. To mark the occasion, Bodo had introduced a novel feature. For the first time, at the request of the French team, the course included a river jump with the objective of perfecting the preparation of the horses for the upcoming championships, Olympic Games and European Championship. The river did not pose any major problems, unlike the delicate triple vertical-vertical-oxer, where many pairs lost out. The first clear round was achieved by Spain’s Eduardo Alvarez Aznar, riding his Legend, who is dreaming of a double after his victory in the 4* Grand Prix in Grimaud last week. Earlier in the day, the Belgian rider Grégory Wathelet on Cocktail de Talma managed to achieve this double in the 2* Grand Prix.

Before the break, only two riders finished this first round without faults, and thus secured a jump-off. Brian Moggre, the pupil of the American Laura Kraut, also qualified, riding Balou du Reventon, a stallion formerly ridden by Ireland’s Darragh Kenny, with whom he won the 5* Grand Prix of Chantilly in 2019. After the break, three Olympic champions qualified for the jump-off: Laura Kraut, team champion in 2008; the French rider, Pénélope Leprévost, gold with the French team in 2016; and Steve Guerdat, current World No. 1 and individual Olympic Champion in London 2012. The list of the riders in the jump-off was completed by Sweden's Henrik von Eckermann, on King Edward; the best French rider in the world rankings, Julien Epaillard, associated with Kosmo van Hof Ter Boone; Portugal's Luciana Diniz on Vertigo du Désert; and another Olympic champion, Scotland's Scott Brash on Hello Senator, gold with the British in 2012 and winner of three 4* Grand Prix at Hubside Jumping since its launch in April 2019. This made a total of nine riders for the jump-off – just as we like it.

First to start in the jump-off was Spain's Eduardo Alvarez Aznar. He achieved the first double clear round, in a less than impressive time. The next round by the American rider Brian Moggre did little to allow us to better appreciate the time that Alvarez Aznar offered to his competitors. The American seems to have aimed for a clean round, without necessarily playing for time. Things started to become clearer when Laura Kraut and Baloutinue left the arena after knocking a pole down on the last obstacle, but above all in a crazy time, albeit slower than the Spanish rider. He had clearly placed the bar higher than we expected. Then Pénélope Leprévost, the French Olympic champion went clear with Vancouver de Lanlore, but still behind the leader’s time. Steve Guerdat then entered the ring and manages to lower the reference time by 66 hundredths of a second. Behind him, the Jurassian had nothing to worry about, since the Swedish rider von Eckermann left the arena with four penalty points, like the French rider Julien Epaillard (in a better time than the Swiss) and the Portuguese rider Diniz. The Scotsman, Scott Brash finished the course with two poles down.

"This is my first victory as a father, so it has a special flavor. I can imagine that my daughter didn't understand everything that was going on (smile), but it makes me happy to imagine that I won this 5* Grand Prix for her on the day she celebrates her fifth week. We realized in the jump-off that Eduardo Alvarez Aznar, the first rider to start, had set a much tighter time than we could have imagined by watching on the screen. I don’t think that my course walk of this jump-off was the best I have done. I had to remove strides everywhere: that's why we were caught off guard in the jump-off and Eduardo's time. I tried to take off some strides, but I couldn't (smile), so I accelerated a lot to get into the double.

As a result, my jump-off might not have seemed very harmonious. Anyway I'm happy that the horse jumped superbly. I didn't think it would be enough for the jump-off, but it was. We may have benefited from Julien Epaillard's four points. None of my horses did much last year. This one has taken part in two or three competitions in 2020. He started again in Spain this year on small events and a 3* Grand Prix. Then everything stopped again for the European horse riding. So this is obviously his first competition. He’s in great shape and in good spirits. On the first day he was a bit fresh, and I was afraid it would not be enough for today, but he gave it his all and was in a form like he has rarely been", explained Steve Guerdat who is closing the first series of competitions in Grimaud. The riders will meet again in June for another five weeks of competition, including three 5* competitions.

The Stal Tops hosted a CSI4* in Valkenswaard which provided the occasion to see the Dutch facilities back on turf. Jan Tops had promised that the switch to sand would not be definitive and to the delight of all the founder of the Global Champions Tour kept his word. This is a decision that goes against the grain, since sand is becoming more common, but can only delight competition enthusiasts. The British rider Ben Maher finally won the Grand Prix with Ginger Blue (Plot Blue x Royal Bravour) in eight hundredths of a second ahead of Bryan Balsiger on Ak's Courage (Chepetto C) while Michael Van der Vleuten completed the podium with Beauville Z (Bustique). "There was a fairly large and rather tricky course with challenging distances. I often had to take an extra stride. Ginger Blue was very careful. She gave me a good feeling in the first round and that gave me confidence for the jump-off. I did what I could, and Ginger Blue is by nature a very fast horse. Everything went as planned. It's a good boost for the upcoming season," said Ben Maher.

In the CSIO3* in Prague, the Czech Republic won its Nations Cup ahead of Denmark and Belgium. On Sunday, in the Grand Prix, the Irish David Simpson won with Foudre F (Narmelus R) ahead of the German Philip Houston on Sandro S Bella (Sandro Boy) while the Japanese Koki Saito completed the podium with Chilensky (Chaiton).

In Germany, Redefin organized a CSI3* where the locals reigned supreme, taking the eleven first places in the Grand Prix. The victory went to Richard Vogel on Never Walk Alone (Numero Uno) - four tiny hundredths of a second ahead of Andre Thieme on Chakaria (Chap) while the third placed rider Carsten Otto Nagel on L'esperance 2 (Lord Z) was one second fifteen behind the winner!

Riders wishing to compete in the two-star category were spoilt for choice with no less than five CSI2* events taking place over the weekend. In this respect, Nancy was a bit of an isolated case compared to the other competitions organized in large facilities used to hosting numerous events throughout the year. The line-up of the French CSI also showed the enthusiasm of the riders to ride in other arenas. The Swiss Pius Schwizer came out on top with Balou Rubin (Balou du Rouet) ahead of Stéphanie Hennequin on Black Pearl d'Amont (Romando de l'abbaye) and Guillaume Rolland Billecart on Ustica des Luthiers (Kashmir van't Schuttershof).

It was a Belgian double in the Opglabeek’s 2* Grand Prix, where Koen Vereecke won with Lector vd Bisschop (Bamako de Muze) ahead of Vincent Lambrecht on Catwalk Harry (Verdi), while Jana Wagers completed the podium on Chacco's Lady (Chacco Blue)

In the CSI2* in Peelbergen in the Netherlands, the young American rider, Schaefer Raposa won on Mexico (Niveau) ahead of the British rider, Chad Fellows on Eindhoven DH (Vaillant). The English duo streaked ahead of no less than five Dutch riders.