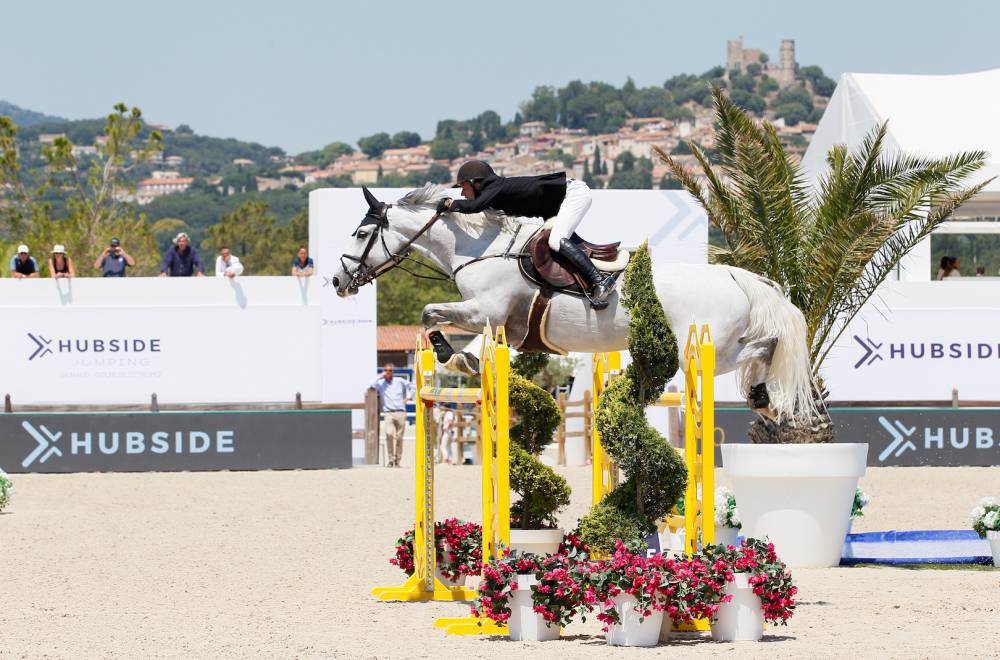 It was a double win for Maïkel van der Vleuten and his mount, Dana Blue (Mr. Blue). They were victorious in the 4* Grand Prix last Sunday, and the pair did it again this Sunday in St-Tropez, beating Daniel Deusser and Killer Queen (Eldorado Vd Zeshoek), and Emanuele Gaudiano on his generous mount, Chalou (Chacco-Blue).

Maïkel van der Vleuten will of course be there next weekend, but he hasn't yet decided which horse he’ll be riding: "For next week, I have to talk to my father Eric: the schedules for each competition are always discussed within the family. This week, my horses only competed in two events each, an easy one, and a bigger one. Anyway, I think that Beauville Z will jump the CSI5* Grand Prix"

Also, in the Grand Prix jump-off, Emilio Bicocchi won on Friday in the event which counts toward the rankings with his faithful mount Evita Sg Z (Verdi Tn). "Evita has been in great shape over the last two weeks at HUBSIDE JUMPING. You could even say that she has been in great shape for a year. She has been performing well and I'm very happy because we weren't used to going without any competitions for so long. Her last competition dates back to the Longines FEI World Cup in Bordeaux where she placed in the Grand Prix and obtained her qualification for the Las Vegas Final. Then there was nothing until last week... You never know how the horses will react after such a long break. But she's doing very well."

Hubside jumping continues its momentum next weekend with a CSI5* which promises to bring together all the best riders!

Even though Steve Guerdat didn’t go to Hubside Jumping, he was a strong contender for the Corcelles Grand Prix, held at the Balsiger family’s home, near Lake Neuchâtel. His fiancée, Fanny Skalli, would have won if she hadn’t knocked the rail down at the final obstacle of the jump-off, which relegated her to 5th place with Jonka A (Cardento 933), a fate that also befell Niklaus Rutschi, who took 4th place, having posted the fastest 4-fault round of the jump-off with Baloubelle CH (Baloubet De Rouet).

Victory went to Werner Muff and Jolie van Het Molenhof (Nabab De Reve), ahead of the Master of the property, Bryan Balsiger, who placed 2nd with Jenkins ter Doorn (Numero Uno), having been beaten by 13 hundredths of a second. Audrey Geiser took 3rd place with Holiday X (Liandero). Bryan Balsiger and Audrey Geiser are thus at the top of the wild card rankings for the CHI Geneva after two stages.