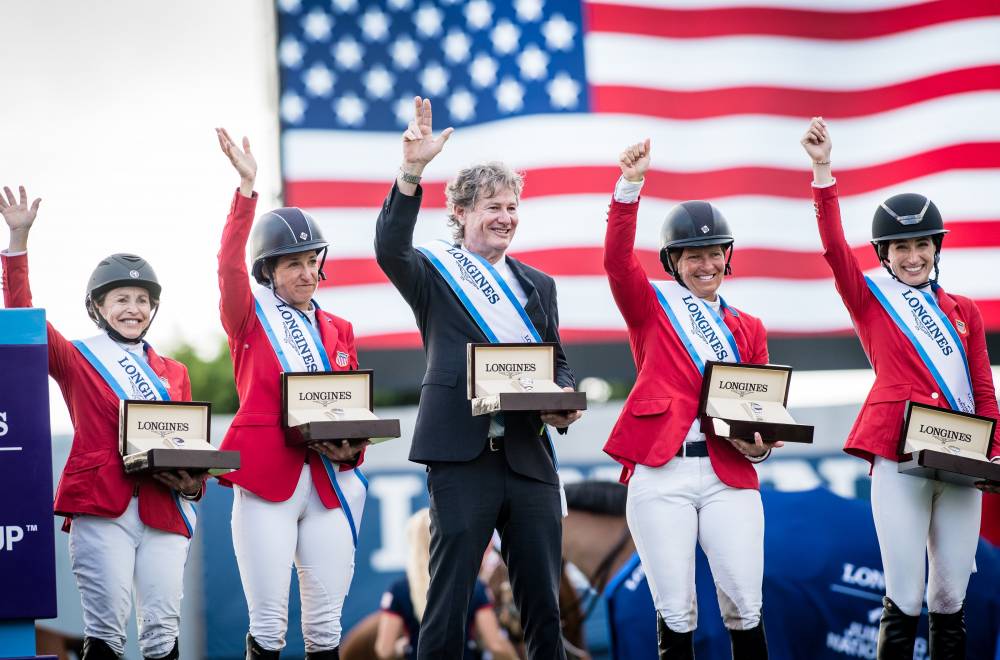 Thanks to Beezie Madden’s historic jump-off, the American Ladies won the Nations Cup in Wellington. Neck and neck with the three British riders, the Americans sent Beezie Madden to the jump-off. Darry Lou was still fresh since she didn't have to do a 2nd round. Young Alexandra Thornton couldn’t beat Beezie Madden's time and the British had to settle for a good 2nd place. Laura Kraut, for the United States, achieved a magnificent double clear round with Confu. For the British, it was Emily Moffitt who also rode two clear rounds with the powerful Winning Good. Third place went to Mexico, with Nicolas Pizarro's double clear round against Fabrice DN. Fourth place went to Canada, thanks to a double clear  by Tiffany Foster and Figor. A good reaction from Olympic champion Eric Lamaze who, after a 10-point lap, got back on track in the second set by achieving a clear round with Coco Bongo. Fifth place went to Israel, who had to make do with the elimination of Ashlee Bond at the water with his young Donatello, who was placed in the Grand Prix on Friday. Ireland was sixth, Australia tied for seventh with Brazil.

The Germans took everything in the Neumünster CSI3* Grand Prix and they now occupy the first 10 places. Victory went to Mario Stevens on Landano OLD, ahead of Marco Kutscher on Charco 2 and Patrick Stühlmeyer with Varihoka du Temple.

Mathieu Billot won the Vilamoura CSI3* Grand Prix  with his faithful Quel Filou 13 ahead of Anouk de Ruijter on Quantas 15 and Charlene Bastone on Sanlou.

At the Wellington WEF, Jessica Springsteen was victorious on Volage du Val Henry in the CSI3* Grand Prix. 2nd place went to Rachel Cornacchia with Valkyrie de Telma and Ali Wolf on Casall.

In the Sunshine Tour, victory went to Belgium thanks to Gudrun Patteet in the CSI2* Grand Prix. With Sea Cost Kashmira Z, she was ahead of Michael G. Duffy on Flint T.s and Pedro Veniss on Boekmanns Lord Pezi Junior. We should also mention the 8th place of Yannick Jorand, who celebrated the return of his star ride Cipetto 2.

Marlon Zanotelli won Oliva 2* Grand Prix with Sweet Tricia (Berlin) ahead of no less than four French riders: Marie Demonte, 2nd with Dindoctro (Indoctro), Fanny Skally who has been accruing performances at the beginning of the year, this time 3rd went to Jonka A (Cardento) and Mégane Moissonnier, 4th with the stallion Cordial (Casall), leaving 5th place to Nicolas Delmotte on Urvoso du Roch (Nervoso). He could have contended for second place if it hadn’t been for the fault at the jump-off, but who will also remember the great comeback in competition of Ilex VP.

Maikel Ven der Vleuten won the Lier 2* Grand Prix with the stallion Edinburgh who is a son of his former mount, Vleut. The Dutch rider went ahead of the Austrian Katharina Rhomberg on Dinadja (Unaniem) and the Belgian Yves Vanderhasselt on Hetman of Colors (Calvaro).