Switzerland reclaims the lead before the final! 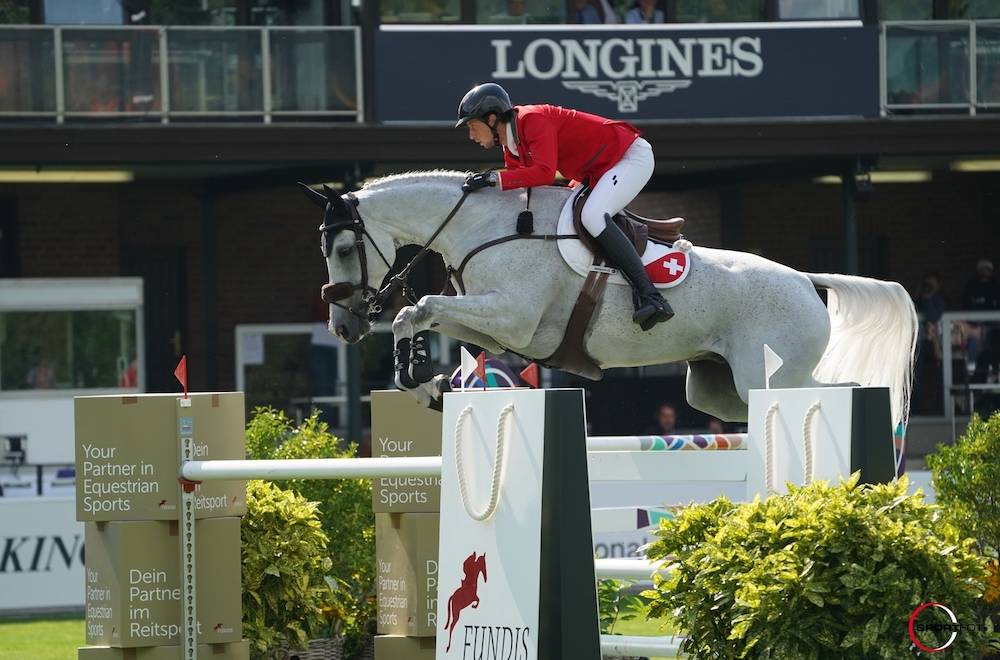 The nations are moving up in the rankings throughout the rounds of the European Championships in Riesenbeck. Today, Switzerland dominated and is in the lead before the team final.

Course designer Frank Rothenberger concocted a course that was harder than the previous day, but still quite manageable for the first day of the team final. Despite the slightly more difficult sequences at the end, the number of clear rounds was considerable. However, rankings among the leaders moved and in particular for the Swedes who conceded three faults. The excellent performance of Rolf-Göran Bengtsson and Ermindo W (Singapore) wasn’t enough to keep them in the lead. The pilot was nevertheless satisfied with the performance of his 12-year-old stallion: "It took him some time to get comfortable at the 1.45m level. He was intimidated and held back a bit, but when he managed to overcome that, he passed a milestone." A team bronze medalist at the 2013 European Championships in Herning with Casall, Rolf is well on his way to winning another one: whether it be in the team or individual event, where he is currently sitting in third place. After Casall, will Ermindo W be Rolf-Göran Bengtsson’s new star?

Martin Fuchs and Switzerland are in the lead

This round was good for Switzerland, which managed to keep its points from the first qualifier thanks to clear rounds from Martin Fuchs, Steve Guerdat and Elian Baumann, so Bryan Balsiger's four-point score was erased. "We know the possibilities and our riders’ potential, but for the horses, who are all participating in a championship like this for the first time, many things are new," confided Chef d’équipe Michel Sorg after the round. "The fact that we’re now in the lead is of course great, but tomorrow is another day."

Meanwhile, Martin Fuchs, who was fifth after the first qualifier, managed to climb back to the top of the individual rankings with Leone Jei (Baltic VDL). Elian Baumann and Campari Z (Contact v.D. Heffinck) also made a perfect start to their first European Championships. They finished fourth in the individual competition, ex-aequo with Steve Guerdat. The former World No. 1 decided to trust Albfuehren's Maddox (Cohiba 1198) for this event. The little bay is now responding wonderfully despite his lack of experience at this level. He has only competed in four 5* Grands Prix, the first of which was in St. Gallen in June! Boosted by the presence of the German public, which is becoming more and more numerous as the days go by, the four German team riders managed to keep their second place in the team competition. Christian Kukuk and Mumbai (Diamant de Semilly) are only a few hundredths of a second behind Martin Fuchs in the individual competition. "Mumbai has a championship mindset: he’s getting better and better every day. He gave me a good feeling, which isn’t always easy to get, but I hope it will continue like this." The gray is only 9 years old and it's still tricky to know if he'll make it to the end, but he'll certainly be able to count on his compatriots Andre Thieme, Marcus Ehning and David Will to help him out in that task. At home, Christian Kukuk and Mumbai have an easy ride

The points won so far will be kept for the team final which will take place tomorrow from 1pm. The Swiss have a small lead over their German rivals (5.47 points against 8.77). "There’s still a long way to go before we can talk about medals," said Steve Guerdat. Nine other teams will compete for the title. In addition to Germany and Sweden mentioned above, there will also be Belgium, Ireland, France, Denmark, Great Britain, Spain and Austria. The Netherlands were left at the gates of the final.

This round will also be crucial for the pairs who will compete for their qualification for the individual final on Sunday.