The star of Geneva continues his ascent 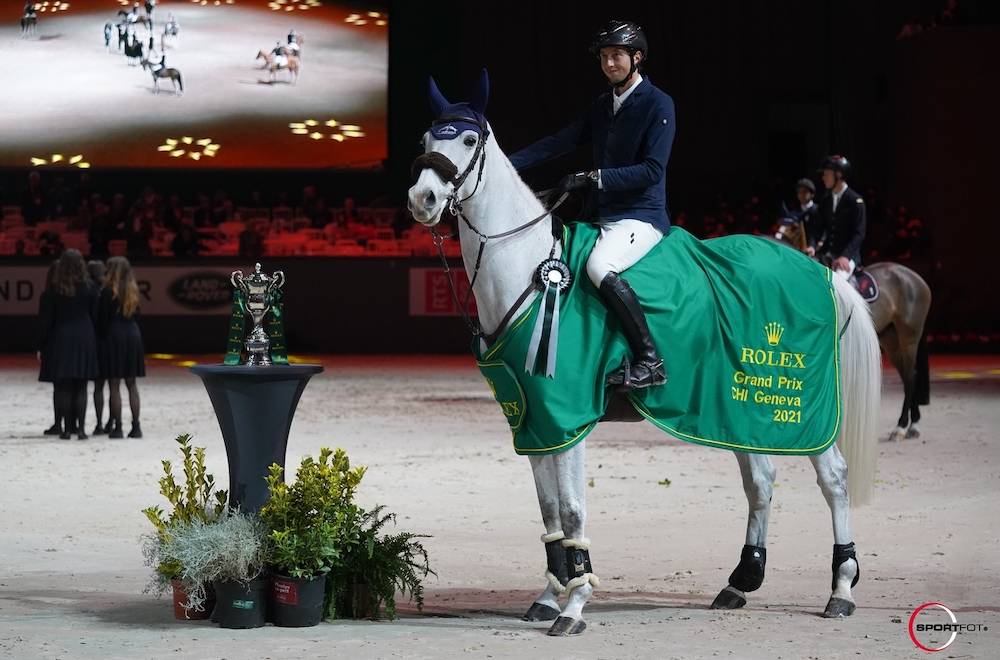 Winning a Rolex Grand Slam Major is difficult, winning it twice in a row is even more so. However, that is what Martin Fuchs achieved this afternoon in Geneva. At the age of 29, the Swiss rider proved again that he deserves to have his name written among the legends of equestrian sports.

The 2021 season will soon come to an end and although it has been a busy one, it’s always with a particular pleasure that the riders come to Geneva with their best mounts. The CHI is one of those competitions that has a special soul and flavor, that you don't miss out, especially since it celebrated its 60th anniversary this year. The Covid-19 pandemic and the snowfalls (welcome in Switzerland!) didn’t prevent the riders from showing up. 41,000 spectators joined the event throughout the weekend and the stands were packed for the highlight of these four days of competition, the Rolex Grand Prix.

Perhaps with a touch of chauvinism, the public is always there to encourage their home riders. There were 8 Swiss riders that qualified for the Grand Prix. For some of them, like Elin Ott and Edouard Schmitz, it was the first time, and they got the job done. At 22, Elin Ott finished his first Geneva Grand Prix in 12th place with only four faults!

Nevertheless, Steve Guerdat obviously has a special place in the hearts of the public. As soon as he enters the arena, the stands roar with encouragement and the applause meter always breaks records. It must be said that the Olympic Champion has always put on a good show for them, having won a dozen major events in Geneva, including the Grand Prix three times, but this year wasn’t the most successful one the champion has ever had.

Today, it was another rider who delighted the public's heart. Since his breakthrough at the highest level with Clooney 51, Martin Fuchs has achieved one success after another, both in the championships and in the Grand Prix. After finishing last in the Top 10 on Friday, he was keen to take his revenge in the Grand Prix. Mission accomplished! A son of Baltic VDL with his atypical style, Leone Jei has never ceased to impress this season, notably at the European Championships in Riesenbeck where he won gold in the team event and silver in the individual event

"At the course walk, I told Gérard Lachat (editor’s note: the course designer) that it was the best course he had ever built here," said Martin. Without giving us too much time to breathe, he asked for a real reflection of the stride lines. The combinations, including the double water jumps placed next to the lake, which is identical to the one in Aachen, were the faultiest. In the opinion of all, it was difficult but fair! Many of the favorites were held in check, including Daniel Deusser, Olympic Champion Ben Maher, and others who were in great shape, such as Henrik von Eckermann/King Edward and Jérôme Guery/Quel Homme de Hus.

Six of them secured their ticket to the jump-off, the first one being Darragh Kenny, who was 24th to go, which means that the first clear round was long overdue! He was followed by Martin, Kent Farrington, Max Kühner, Laura Kraut and Harrie Smolders. The first three of which have already won a Rolex Grand Slam Major, while one is an Olympic Champion and the last a European Championship medalist. The battle for victory promised to be tough...

In the jump-off, Darragh again opened the way to a clear round with VDL Cartello (Cartani 4). The next four riders tried to do better; Kent Farrington would have succeeded if he hadn’t knocked the last obstacle with Gazelle, but it was Martin Fuchs who won. "We watched Martin's round and he used Leone Jei's abilities perfectly, even though he’s not naturally the fastest," admitted Max Kühner, who came third in the end with the efficient Elektric Blue P (Eldorado v. Zeshoek). "Actually, the jump-off was great for me because Leone Jei has a massive stride, I was able to take strides out everywhere and that put a lot of pressure on my competitors," analyzed Martin. "No one was able to take the same number of strides in the last row. I tried to turn shorter to compensate, but it wasn't enough," explained Harrie Smolders, who came second with Monaco (Cassini II). With the agile Monaco, Harrie Smolders climbed to second place, only a few tenths of a second behind Martin!

After winning two medals at the European Championships this summer, Leone Jei (only 9 years old!) showed once again that he has all the makings of a great athlete. As for Martin, he made history by winning the Rolex Grand Prix for the second consecutive time. As far as the excellent memory of Alban Poudret goes (editor of Le Cavalier Romand and sports director of the competition), this has never happened before, although Rodrigo Pessoa and Steve Guerdat have already won several times each. Nevertheless, Martin has started a new Grand Slam. Will he succeed where he failed in 2019 by winning the next Major at 's-Hertogenbosch in March 2022? "I hope I don't miss this time!" he concluded! Martin Fuchs surrounded by Harrie Smolders and Max Kühner on the podium!