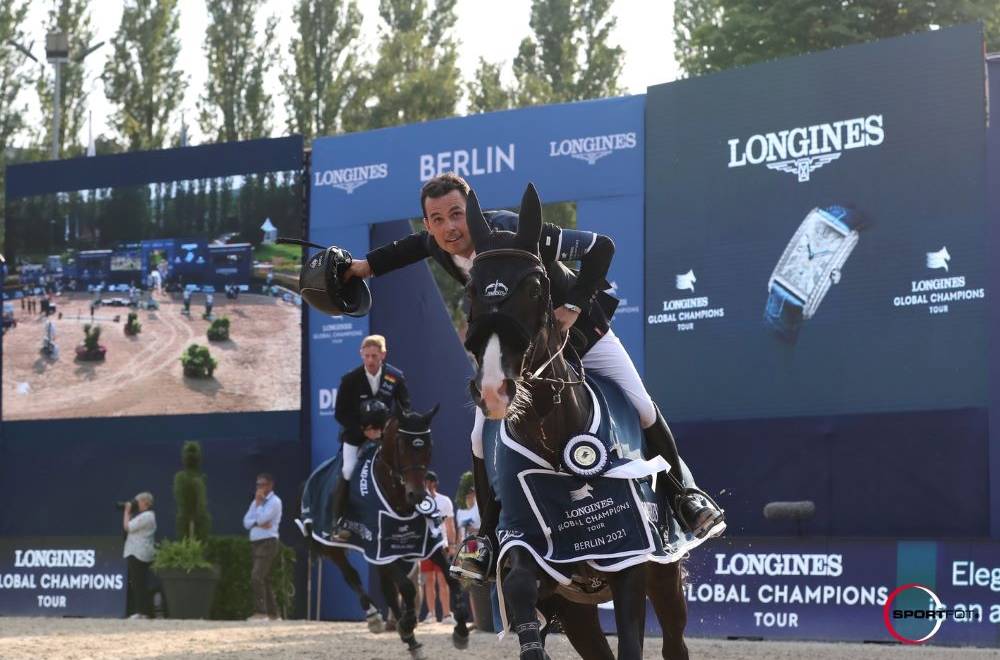 The great transmigration towards the Tokyo Olympics might have begun but competitions in the rest of the world have not stopped. Several CSI's were on the program in addition to the European Championships for Children, Juniors and Young Riders.

After Belgium’s reign, which harvested the three team gold medals at the beginning of the competition, the individual finals were the occasion for the other nations in the running to finally hear their own national anthems.

For the Young Riders, the result of the very first speed event was crucial, since it determined the orders of the pairs on the podium. Germany’s Matthis Westendarp won gold, ahead of the British rider John Whitaker and the Belgium rider, Emilie Conter.

In the junior category, the Belgians were not far from achieving the same feat once again. However, Tristan Guisson lost 0.1 point too many... He won the silver medal ahead of his compatriot Aurelia Guisson, while the gold went to the British rider, Ava Vernon.

On the Children's side, the emerging show jumping nations were banking on the younger generation. The title of European Champion went to Hungary’s Gyula Szuhai Jr., who won ahead of Finland’s Hugo Kogelnig and the Czech rider Anna Marie Vitek.

After being ridden by many riders, including Steve Guerdat, with whom he won the World Cup Final in Gothenburg in 2019, Alamo (Ukato) seems to have found a new winning partner in Sergio Alvarez Moya. Since their association at the beginning of the year, the pair had already placed in several Grands Prix. They finally made their mark by winning the Global Champions Tour event in Berlin last Saturday. "He deserves this victory, he works hard every time, so I'm very happy for my horse", said the rider afterwards. If he was a little afraid of Marcus Ehning, always great in the jump-off, the latter finally finished second ahead of Kevin Staut who was definitely in good form this weekend. He finally kept first place and thus the lead in the Longines Global Champions Tour, also qualifying for the Super Grand Prix in Prague at the end of the season.

The Michigan city once again hosted a CSI5* event. Victory went to Beezie Madden in the $230,000 Grand Prix. The American champion was riding Breitling LS (Quintero), a former winner of the World Cup Final in 2018. She beat two other Americans: Kristen Vanderveen and Kyle King.

The fourth round of the EEF Series (formerly European Division 2) was held this time in the capital of Poland, Warsaw. With four points at the end of the first two rounds, Italy and the Czech Republic had to fight for victory in the jump-off. In the end, the Italian team composed of Giulia Martinengo Marquet, Francesca Ciriesi, Piergiorgio Bucci and Antonio Alfonso won. Austria completed the podium.

In Saugerties, New York, the Grand Prix designed by Canadian course designer Daniel Foster was a tough one for pairs competing in the CSI4* Grand Prix. Only two riders qualified for the jump-off. The final course gave the advantage to the American rider, Jonathan Mc Crea, who won ahead of Ireland’s Declan Egan and Heather Caristo-Williams.

In Tryon, the CSI3* Grand Prix sponsored by Horseware Ireland couldn’t have dreamed of a better outcome than an Irish victory. This was achieved thanks to the double clear round by Richie Moloney, on Rocksy Music (Ars Vivendi). He beat the American rider Brooke Kemper and Santiago Lambre from Mexico. In Slovakia, the CSI3* ended with victory for Brazil’s Matheus Correa in the two-round Grand Prix. Riding Zeusz, he beat the Dutchman Gerben Morsink and the Slovenian Urh Bauman.

In Azelhof, the Belgians, who were riding this CSI3* Grand Prix at home, were placed on the highest steps of the podium. Wilm Vermeir won a particularly fast jump-off with Joyride S (Toulon), ahead of his compatriot Jens Vandenberk, while the Dutch rider Piet Raijmakers Jr took third place.

In Denver, the North American riders dominated in the CSI2* Grand Prix. The women's competition was the most important one, thanks to victory by Hunter Holloway of the USA. Riding Pepita con Spita (Dsp Con Spirit), she beat her compatriot Zume Gallaher. Darrin Dlin from Canada took third place on the podium. The Italian rider, Omar Bonomelli won at home with the help of his Selle Français, Chippendel de la Tour (Conrad) in the Grand Prix with a field of more than fifty starters. He was ahead of Austria’s Marianne Autschindele on Acoustik Solo du Baloubet (Baloubet du Rouet) and his compatriot Luca Marziani with Eclair (Gitano).

There were only three runners-up in the Grand Prix in the Belgian international. Marthe Heudens won with Linguini de la Pomme (Marius Claudius) while Bart Clarys on Geste van de Vihta (Zirocco Blue) and France’s Aymeric Bray on Picobello Jasmine, daughter of Arezzo once ridden by Gregory Wathelet, shared the rest of the podium.

Hickstead CSI2* brought together mainly riders from Great Britain and Ireland, so the victory fell unsurprisingly into the hands of the British rider, Mark Edwards on Monteuxs Tale (Tinkers Tae). He was followed by Kerry Brennan on Wellington M (Quidam de Revel) while their compatriot, Will Edwards completed the podium with SHW Candies B (Chacco Blue).