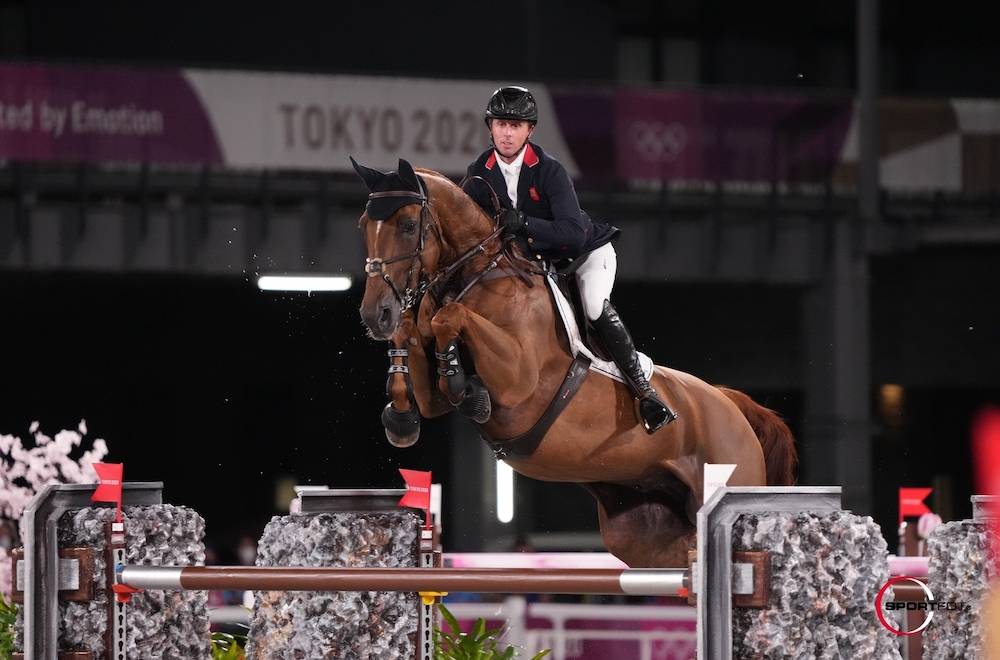 The individual Olympic title remains in the hands of Great Britain! In Rio, Nick Skelton stood on the first step of the podium, while in Tokyo it is the turn of his compatriot, Ben Maher. Although Peder Fredricson and Maikel Van der Vleuten completed this winning trio, the script for this individual final was more improbable than many would have believed. Let's take a closer look at this event.

Tokyo 2020 brought us the new event format with the individual final preceding the team test. After the qualification round last night where 30 riders got their passes, there were still some big names missing from this final, such as Steve Guerdat and Kent Farrington.

New Zealand’s Daniel Meech was the first to try out the course designed by Santiago Varela. The Spanish course designer chose to line up 18 jumps with obstacles up to 1.66m, including a water obstacle and three combinations - two doubles and a triple. With a time limit of 88 seconds, the course seemed quite long, so there was no time to hang around! Cian O'Connor and his gray Kilkenny (Cardento), and Scott Brash on Hello Jefferson (Cooper vd Heffinck), paid the price by not dropping any bars but faulting on time. Without doubt Santiago Varela had once again proposed a course worthy of his name, putting the riders and horses and their supporters to the test! "We have a very difficult course here, the course designer has really asked everything he could ask for", commented Daniel Deusser, World No. 1 in the International Equestrian Federation (FEI) ranking. The first clear round had to wait for the tenth attempt, a very popular pair with recent rankings in the 5*Grand Prix of Windsor and Saint-Tropez. They were of course Sweden’s Henrik von Eckermann and King Edward (Edward 28), followed by their team-mate Malin Baryard-Johnsson with Indiana (Kashmir van Schuttershof). Yes, we can say "full force" for Sweden, since Peder Fredricson also got his pass to the jump-off with his very good All In (Kashmir van Schuttershof), at 15 years of age, still as fresh as ever. Japan deserves special mention for managing to qualify its three riders for the final. This emerging nation could not have dreamed of anything better here, on their home turf. One of their riders, Daisuke Fukushima, pushed open the doors to the second part of the competition. A total of six pairs were ranked for the final jump-off, with Ben Maher and Maikel van der Vleuten at their side.

Belgium was here with its three qualified riders. Germany was here with World No. 1 Daniel Deusser, and Switzerland, with Beat Mändli and Martin Fuchs. These are nations that we have regularly seen on the podiums throughout the year and they certainly could not have imagined a worse outcome during this final. Clear throughout the course, Quel Homme de Hus (Quidam de Revel) crashed on the last vertical, emblazoned with the colors of the Tokyo Games and the dream of a medal was gone for Jérôme. It was also a hard blow for the two riders leading the world ranking, Daniel Deusser and Martin Fuchs, who were each penalized by two bars at the end of the course. "Clooney 52 (Cornet Obolensky) jumped the third last fence very careful, very backwards. I landed and I didn’t see the five strides to the second last, so I decided quickly to do the six strides, but didn’t execute them properly enough. We got too close to the second last fence and had the rail down. Then I was just like, ‘let’s go as fast as we can to the last fence so maybe be the fastest four faults’, which also didn’t work out." said the Swiss rider, reigning European champion, to Horse & Hound. France had only one representative in this individual final, Nicolas Delmotte and Urvoso du Roch (Nervoso), the recent winner of the Rolex Grand Prix of the Master of Chantilly. Unfortunately, despite a beautiful course, the duo was penalized by knocking over a bar along the way and garnering a time point as well. These nations will have their hearts set on revenge in the team competitions, with the first qualification on Friday and a final on Saturday.

First to enter the ring in this jump-off was Jos Lansink's former pupil Daisuke Fukushima. He was not put off by the experience of his competitors and scored a double clear putting him in sixth place. Although very fast and with a clean score, Sweden's Malin Baryard-Johnsson and Henrik von Eckermann did not make it to the podium, finishing the competition in fifth and fourth place respectively. It was a tough battle for the podium! The British rider, Ben Maher, who started before Peder Fredricson and Maikel Van der Vleuten, made it quite clear that he had no intention of giving up the position he had held with his faithful Explosion W (Chacco-Blue) since the previous day, namely first place! Ben Maher looked unbeatable, and he was! "I’ve had many good horses in my career, but I won’t ride another one like him. I’m biased, but I believe I am on the best horse. He’s an incredible horse and I’m very fortunate to be able to ride him for Pamela Wright and Charlotte Rossetter. They kept him for me for this, and with that comes pressure. All the nerves that I have coming from the hotel today and the things going on in my mind, actually when I get to the gate and I go in, it kind of all goes away. I jump fence one and something clicks – Explosion just fills me with confidence", said the new Olympic champion. Peder Fredricson settled for silver with All In, at 1.64m he is barely any taller than the obstacles he was jumping. At the Rio Games in 2016, the duo was already in second place in this individual final. With almost 90 hundredths of a second more, Maikel Van der Vleuten could not make it any higher than the third step of the podium with his eleven-year-old, Beauville Z (Bustique).