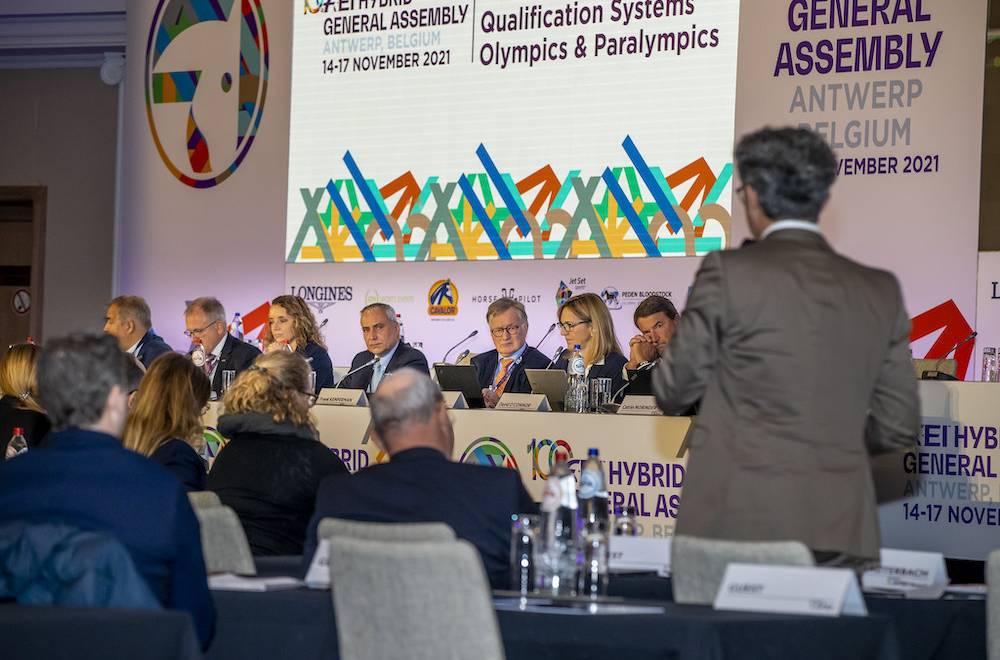 The vote during the International Equestrian Federation’s (FEI) General Assembly concerning the number of riders in the Olympic Games championship gave its verdict yesterday: as happened in Tokyo, there will only be three combinations per nation during the Paris 2024 Olympic Games. It’s a hard blow for the riders. Over the last few days numerous riders have raised their voices to call for a return to the old system and to the teams of four.

From November 14 to 17, the International Equestrian Federation invited its national federations to participate in the institution's annual General Assembly, which took place this year in Antwerp. New this year: while video broadcasting of the meeting has been in place for several editions, the FEI introduced a "hybrid" format for 2021, allowing federations that weren’t on site to vote remotely. However, this is certainly not the topic that will be remembered...

The new Olympic format that was tested in Tokyo (teams of three, with the individual championship placed before the team championship...) was at the heart of the debate and the riders didn’t fail to point out the inconsistencies of this system, which is dangerous for the sustainability of equestrian sports at the Olympic Games. On November 15, Steve Guerdat was invited to speak as the rider representative and, in a speech that was as sincere as it was alarming, pointed out the stakes and dangers of such a format, particularly concerning animal welfare: "We have seen too many images of riders who simply do not have the ability to compete at the Olympic Games. On the other hand, I am firmly convinced that no rider should ever be forced to finish their course no matter what. This new format forces us to finish our round so as not to eliminate our team. It goes without saying that a team of 4 pairs and a drop score is much fairer for the sport."

This format, which applies to the three Olympic disciplines, has been hammered by the Swiss rider, known for his involvement in the defense of the sport. The speech was supported by many other riders such as Rodrigo Pessoa, Kevin Staut and Isabell Werth. The queen of world dressage reminded the FEI that it would be good to listen to the riders before the General Assembly and not just during it... And of course, joined Steve on animal welfare. With the reduction in the number of riders per team having been put in place to increase the number of participating nations, the German trainer also warned about the level of sport required for championships like the Olympic Games. Focusing on the quality of our sport, not the quantity, is her modus operandi. "It’s essential that an adequate level is maintained during Olympic selections, because there are qualified nations that are not at the Olympic level: the welfare of the horses then necessarily suffers," she said. "Even putting aside the issue of teams of 3 or 4 combinations, it is essential that all teams are able to compete at an Olympic level. This is especially necessary in showjumping (CSO) and eventing (CCE), disciplines where the risk is high for both horses and riders. We don't want the sport to have a bad image because of the pressure put on the riders."

The riders' demands, which have been widely reported in the press over the past few days, have not yet borne fruit... At the end of the vote to determine how many riders would make up the teams in Paris, 70 of the voters were in favor of teams of three, while only 30 federations supported a return to the old format. An overwhelming majority for teams of three? On paper, yes, but in retrospect, the trial run of the new format in Tokyo disheartened many people. In 2016, only 11 federations voted against the new format. The number of federations that did not want to see the new format continue has tripled over the last Olympiad. It’s a huge leap forward, but not yet big enough to allow equestrian sports to reconsider for Paris 2024.

While the number of combinations per team is set for the next Olympics, the qualification systems and the order of the individual and team events are still to be discussed. On these subjects "nothing is locked in," says the FEI. It’s difficult to believe… "We should be grateful to the past generations for the way they have developed our sport. In the same way, I want to be able to look into my daughter's eyes in the future and tell her with full conviction that I helped build modern equestrian sport," said Steve Guerdat during his speech. Still, we should give riders, the first ones concerned, the opportunity to build their sport of tomorrow... Though the dice are cast for Paris, it will be necessary that the authorities consider their grievances for the Olympics to follow. Otherwise, equestrian sports will disappear from the Olympics very soon!

Featured photo: The FEI General Assembly was held from November 14 to 17, 2021 in Belgium ©FEI/Dirk Caremans