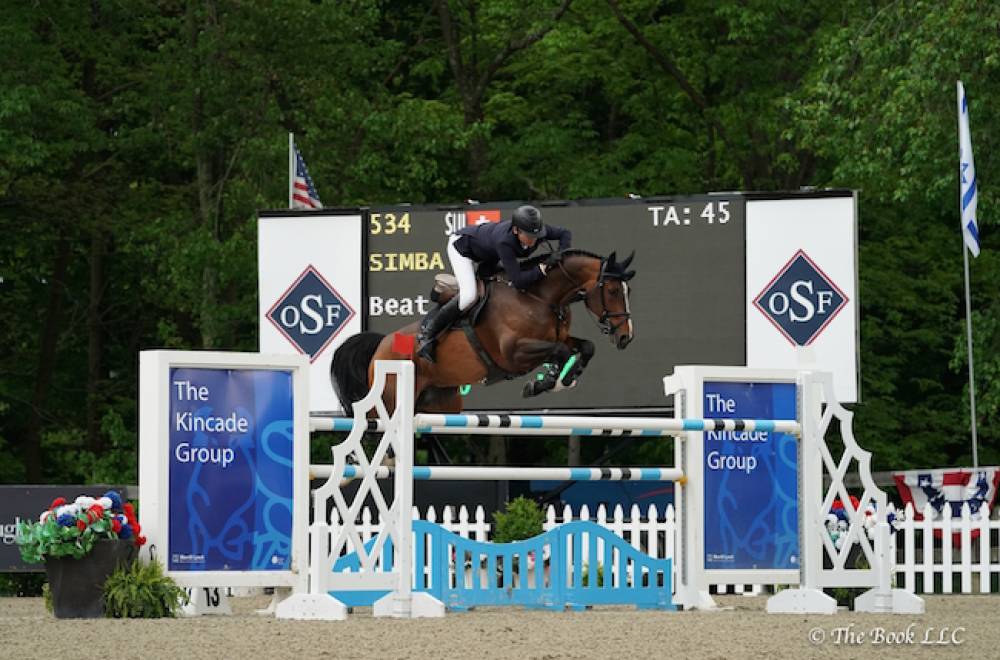 An unseasonably rainy week across the East Coast of the USA may have spoiled the picture perfect atmosphere of the Old Salem Farm Spring Horse Show’s beautiful grass field, which was unusable due to weather this week, but competition proceeded on the venue’s sand arenas, where Switzerland’s Beat Mandli won the $131,000 Empire State Grand Prix CSI3* on Sunday afternoon with Simba (Toulon). Thirty-three pairs entered the grand prix, and with just five in the jumpoff, Mandli had to head off McLain Ward aboard Clinta (Clinton), the talented mare with whom he won the Longines Masters Grand Prix of New York a few weeks ago. Both riders are based nearby to North Salem, New York where the show is held. Mandli was fastest by a hair to take the win; also going double clear was Brianne Goutal-Marteau, who placed 3rd with Viva Colombia (Couleur-Rubin).

Also in Kentucky, another Irish rider, Kevin Babington, won the Sunday grand prix for the second week in the row. Babington rode his veteran partner Mark Q to victory in the $35,000 Bluegrass Grand Prix, coming out just ahead of Todd Minikus and Amex Z. And Abigail McArdle won the U25 Grand Prix with Fanta Light B.

Riders are back at the Colorado Horse Park outside of Denver, Colorado, and Katharin Gualtieri took top honors with the 16-year-old Castalano (Capone) in the $25,000 Spring in the Rockies Grand Prix II on Saturday evening. Paul Rohrbach and Camerino were 2nd, and Nicki Wilcox was 3rd with JES Quito in the three-horse jumpoff.

Finally, the organizers of Thunderbird Show Park held a national exhibition grand prix in downtown Vancouver, British Columbia on Sunday afternoon. The event drew many spectators and billed as a success, with Kyle King taking victory in the grand prix. TBird will host its annual CSIO5* week this coming week.

Photo of Beat Mandli ©The Book for Jump Media