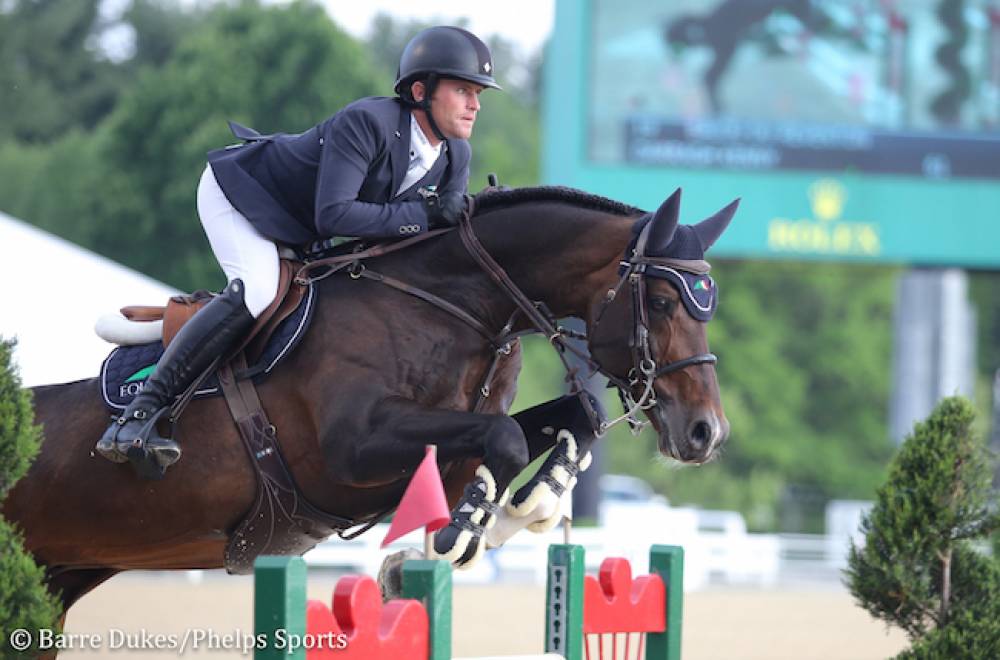 Darragh Kenny is very arguably the most talented rider in the sport at forging winning connections with brand new horses. He’s done it with Imothep, with Prof De La Roque, with Red Star D’Argent and Sans Souci Z. And now, he’s done it with his newest partner, Balou Du Reventon (Cornet Obolensky). After competing together for just two weeks, they picked up the biggest prize of the Kentucky Spring CSI3* at the Kentucky Horse Park.

But the Irish rider is modest when this fact is pointed out; ‘’It is just because I’ve ridden so many different horses in my life, and I’ve had to figure them out quite quickly,” he says. “I think that’s the main reason.”

Kenny’s jumpoff in this past Saturday’s $131 Mary Rena Grand Prix CSI3* in Lexington, Kentucky, USA shows a winning pair at the very beginning of their partnership. See the jumpoff here.

Balou Du Reventon was formerly seen with Jorge Matte of Chile and Russia’s Ljubov Kochetova. With the stallion clearing every fence by miles (he once won a CSI4* Grand Prix with Kochetova as the only clear round with a time fault), he spends extra time in the air that Kenny hopes to hone when he heads to Europe with his top horses this week.

“He’s not a very difficult horse at all – he’s a super horse, very careful, very easy to ride, very naturally talented so it’s easy,” Kenny says. “That’s the last few I’ve done this on, they have all been really superstar horses so it’s worked out well.”

Kenny had his eye on Balou Du Reventon for several years, and feels lucky that he now has the stallion to take to the top levels, thanks to owners Kenny and Ann Thompson.

“I’ve known the horse probably for three or four years now. I always thought he was an incredible horse,” Kenny says. “I just have to work and get him more confident jumping across the oxers. Sometimes he gets a little too over careful and gets too high. He just needs to relax a bit and jump a little more across. I think for sure that will come in another few months time.

Kenny is well set up to make a serious bid for Team Ireland’s Tryon 2018 World Equestrian Games squad. The team will be chosen later this summer. Kenny competed in his first senior team championships at 2014 Caen, where he finished in the top 12.

Now, with four more years of experience under his belt, the World No. 58 is hoping to make a return trip to WEG if all goes well this summer. Not only does he have Balou Du Reventon, he also has quickly made a winning team with Babalou 51 (Balou Du Rouet), the mare that took Australia’s Matt Williams to the 2016 Olympic Games, and that was also successful with Todd Minikus. Kenny won the previous week’s CSI3* Kentucky grand prix with the mare. Kenny’s mount Go Easy De Muze (Vigo D’Arsouilles) is stepping back up to competition after spending time on the sidelines, and he also has Cassini Z, with whom he will save for the LGCT and GCL events that he focuses on.

“It couldn’t have gone better for the two weeks,” says Kenny of his spring tour in Kentucky. “It’s the first time I’ve actually ever shown in Kentucky at the outdoor shows before. It worked out to be very successful; myself and Hardin Towell have started a business together, so we wanted to come here and show a little bit. He’s going to base in Kentucky and I’m going to go to Europe, and we’re going to do both locations together.”

Kenny has his own farm in Holland, near Peelbergen, and a big business that Kenny has been running successfully on two continents for several years now.

“I’m very lucky with the team of people I have, that I can just fly here and get on the horses and go. The most important thing is to have a great team of people around you, and I’m very lucky at the moment that we have a super team of staff, flat riders and trainers and everything. It’s working out great.”