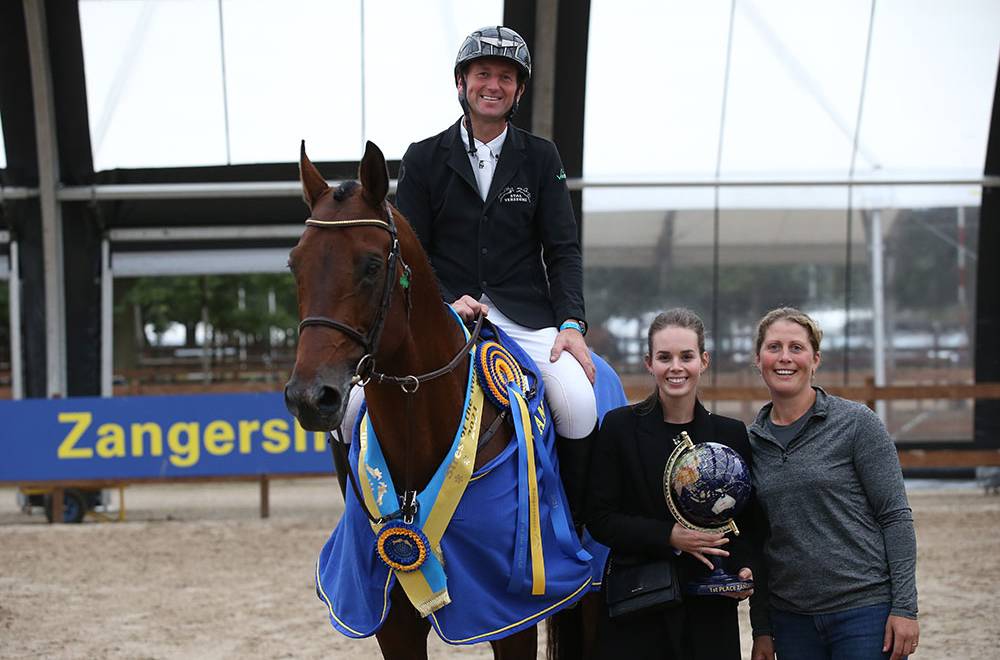 The Covid Safe Ticket has revived the event sector and Lanaken is back for 2021. The sail wasn’t fully deployed though, with the two-week postponement of the selection phase that will be held in Peelbergen, and the facilities were downgraded a little, but the passion was intact and pleasure was there for all to find!

Despite a 25,000 euro prize pool which would require a serious re-evaluation to attract stallions of a higher caliber, it must be admitted that Lanaken’s Sires of The World always attracts many riders trying to showcase young stallions, and others who cannot count on the 5* circuit to showcase them.

The stands of Lanaken were already almost full for this first big meeting of the week, exceptionally moved to Friday afternoon. There were no less than 50 starters and in the end, 14 jump-off combinations, of which, 13 placed. Eugène Mathy's team has once again succeeded in pacing the jumping efforts despite the obvious level disparity between the pairs that competed. First to start in the jump-off, Gudrun Patteet had a small fright before the first obstacle, when her horse thought he would go back to the warm-up ring, but the Belgian rider settled things quickly and headed to the first obstacle without losing time. Sea Coast Valdelamadre Clooney got his mind on the job and completed a very nice jump-off round without penalty in 37.52 seconds.

Young rider Gilles Thomas switched his two mounts that had qualified for the jump-off and started with Unca S (Udarco), completing a very fast jump-off in 34.58 seconds. After them, the rails kept falling and it wasn’t until Christophe Grangier that we saw another double clear. The Frenchman continued his momentum after a magnificent first round, and did it again with his amazing mount Catch Boom Bang (Cornet's Prinz). "At the moment, I have mostly young horses, I only got this horse back 3-4 months ago, so when I saw it, I thought it was quite a course. This is only my fifth show with him, and I've only done one or two ranking events, but I felt he was really good, and I decided to come all the way here just with him. I came here quite confident; he had jumped well yesterday in the warm-up. Afterwards, for the jump-off, I knew I wasn't going to win so I decided to aim for a place and kept my pace. His first crop is two years old and there are some very good foals," Christophe Grangier said. Behind him, the young Hannes Ahlmann from Germany takes the lead by lowering the reference time to 36'.33 seconds with the pleasant Nerrado (Nekton). But it was Koen Vereecke who finally sparked things off after a magnificent jump-off with Kasanova de la Pomme (Bamako de Muze). This son of the incredible Everly Chin de la Pomme (Malito de Rêve), who herself has performed at the highest level, lowered the time to 34.14 seconds. Christian Ahlmann decided to only saddle Dominator 2000 Z for this event and he was obviously very present in the jump-off. As we could imagine, the German attacked the course and we can see that it was very fast... but the clock stopped at 34.15, one hundredth of a second more... and there was a small mark of disappointment in the eyes of the hometown rider! "When you're competing at home, you always have a little extra motivation to win... but unfortunately, today it wasn't the case. I could have taken a stride out in the last line, but I didn't! Dominator had a good break and is back in competition. What is important for me is to find this really special horse that I knew again, and that’s the case today. At the beginning, I didn't bring him here, and then last week, I really felt him getting stronger in Aachen. It was proposed that I bring him to Barcelona, but it was too early for him, and I preferred to bring him here. I'm very happy with his performance and today we saw some real Formula 1 scores." Indeed, because there was still a pair to go, but who could imagine the young Gilles Thomas threatening these two tenors! However, Marc van Dijck’s nephew wouldn’t let himself be defeated. He attacked with his young 9-year-old stallion, Feromas van Beek Z (Fantomas de Muze). He didn’t drag his feet and completed his round in 34.16 hundredths of a second! The podium was split by a mere two hundredths of a second, an incredible scenario! "I didn't see Koen's round but I did see Christian's, who went right ahead of me. I thought his round was perfect, so I said to myself that I shouldn’t try to do better but just do my own round and that's what I did. I'm really happy with my horse. I decided to take him because often when I go to a show, people say to me "What’s his breeding? Is he a stallion? Does he cover? So I said to myself, I'm going to take him to the Sires so that everyone will know that he’s a stallion and that he’s available for breeding!", said Gilles Thomas. Koen Vereecke had a tough time... but he won the 2021 edition of the Sires of the World by one hundredth of a second over Christian Ahlmann and two over Gilles Thomas! "I was very lucky in the first round when Kasanova landed a kick just before the water jump, I had to wait but things ended well. In the jump-off I lost a little time between one and two because Kasanova played up again, then in the last line I thought it was possible to take out a stride. I thought that Dominator’s great action would play tricks on me, but in the end, it wasn’t the case," Koen Vereecke almost apologized. "I have been riding Kasanova for a year. At the beginning of this year I took him on a tour where he jumped very well, but he got injured in the truck on the way back. It wasn't too bad, but we took our time and I finally started riding him again only two and a half months ago! We did several national events before we came here, and it really came down to the wire."