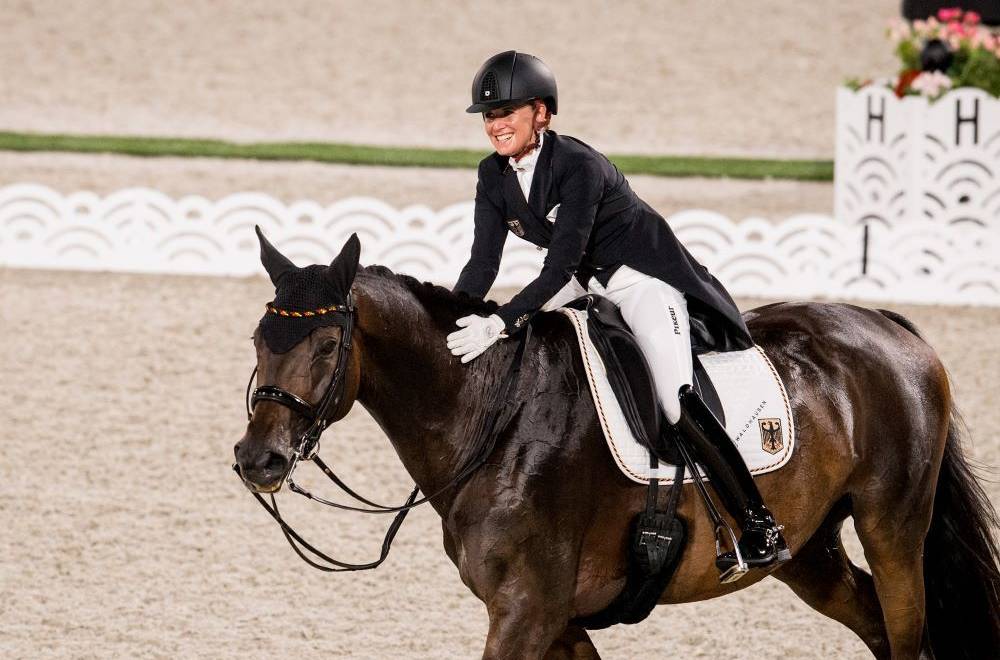 At long last! After waiting for five years, the riders and horses have finally made it to Tokyo. The day after the opening ceremony, equestrian rivalries began with the first day of the Dressage Grand Prix. Germany's Jessica Von Bredow-Werndl in a fine combination with Dalera BB (Easy Gamecomb) is predicted by many to be the favourite. She began the competition in the best possible fashion by posting the best performance of this first day of competition.

Over the last few days, there have been some upsets in the dressage start lists following the retirements of Patrik Kittel, pillar of the Swedish team, and the Austrian rider, Victoria Max-Theurer, whose horses suffered injuries in Tokyo. Nevertheless, the Grand Prix well and truly opened the festivities this afternoon. The first half of the sixty competitors lined up at the start today, the rest will line up tomorrow. Due to Covid 19, all the events are taking place in the huge Baji Keon stadium before the eyes of the riders' staff and their owners only. Despite this the stakes are high and the tension can be sensed as much as ever. The Grand Prix marks a decisive stage in the quest for medals, since it will determine the eight teams which will qualify for the Grand Prix Special where the team medals will be awarded. Germany is undoubtedly the favourite of this competition. We had to wait until the final test to see their first couple start – none other than Jessica von Bredow-Werndl and TSF Dalera BB. These two partners have been in dazzling form lately and there is whispering that they may very well take the individual title next week. Their results are just getting better and better. Look at the proof. They bettered their own personal record this afternoon by achieving a marvellous 84.379%, the best average on this first day.

Except for a last-minute upset which is always possible in this three rider format , Germany seems the most likely to succeed in the team event, but who will be with them on the podium? The Netherlands seem to be off to a good start thanks to their first two riders, Edward Gal (78.649%) and Hans Peter Minderhoud (76.817%). It remains for their fellow countryman, Marlies van Baalen to hammer in the nail tomorrow.

Then there is Denmark too, driven along by its team leader Cathrine Dufour, among the best. She and Jessica von Bredow-Werndl were the only one to cross the 80% threshold, even if her main objective today was to perform a flawless test and to reassure Bohemian (Bordeaux 28). Although talented, the chestnut is equally sensitive. Two months ago at the CDIO in Compiègne, the gelding acted up so much that Cathrine did not even manage to enter the arena, but all this seems to be no more than a distant memory.

We should not forget the United Kingdom, which won gold in London and silver in Rio. The British are again counting on their stalwarts Charlotte Dujardin, who will be presenting Gio (Apache) tomorrow, and Carl Hester, who garnered 75.124% with En Vogue (Jazz). As is often the case, they are betting on the young rider, Charlotte Fry, who is twenty-five years old. After coming up from Young Riders events to her first Olympic Games with her stallion Everdale (Lord Leatherdale), Charlotte Fry gave her team the superb start they needed with a score of 77.096%. Finishing at the head of her group, she has qualified directly for the Musical Freestyle test. Charlotte Fry, the youngest member of the British team, already on her way to the individual final with Everdale

The other challenge of this Grand Prix is the access to the Musical Freestyle Test. The horse and rider tandems have been divided into six groups according to their place in the world ranking. The first two in each group and the next six in the standings will qualify for the Freestyle.

At the end of this first day, six of them are therefore sure to have already won their ticket. In Group A, these are Charlotte Fry and Sweden's Therese Nilshagen; in Group B, Cathrine Dufour and Edward Gal; and in Group C, Jessica von Bredow Werndl and Sabine Schut-Kery, who may very well remain the revelation of this the first day. Moving from the show ring to the dressage arena, the American rider has little experience at this level of competition, despite a team gold medal at the 2015 Pan American Games. How far will she go? Sabine Schut-Kery with Sanceo, the nice revelation of this first day

We will see you again tomorrow at 10am to find out which teams have qualified for the Grand Prix and which individuals are on their way to the Musical Freestyle. The start lists  can be found here.