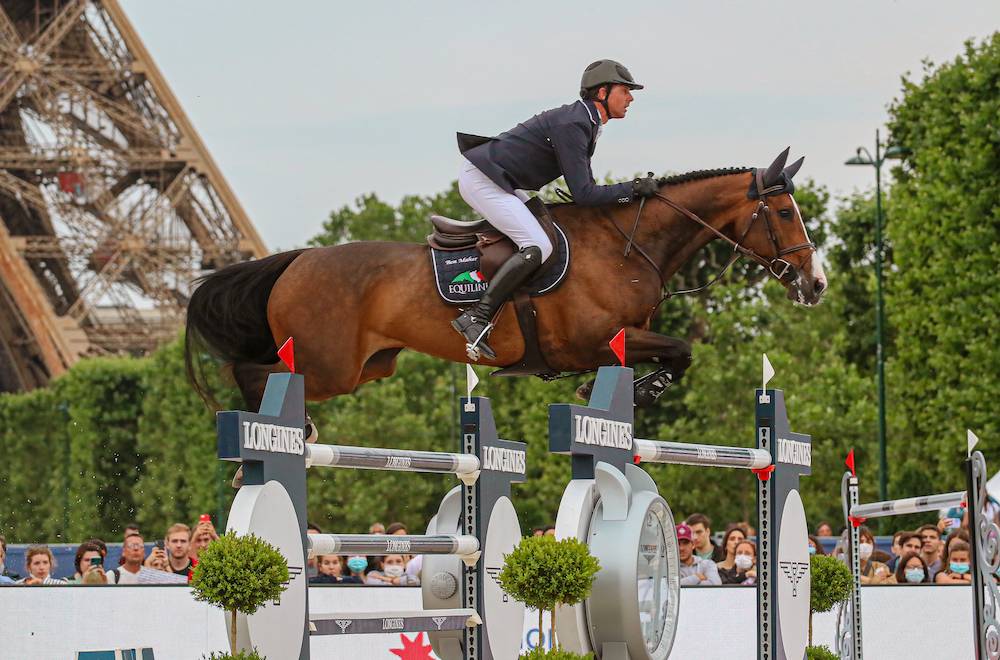 This weekend the Global Champions Tour visited the French capital for its sixth stage. Relocated due to the construction of the ephemeral Grand Palais for Paris 2024, the competition was held even closer to the Eiffel Tower. Let’s look back at this Grand Prix day! While the sun was absent, the riders were plentiful on the Champ-de-Mars! Saturday afternoon started with the second round of the Global Champions League, also qualifying for the Grand Prix. First, the individual riders started before the team competition, with Edward Levy and Rebeca LS (Rebozo la Silla) leading the final ranking. In the team stage, it was first the Cannes Stars of Sameh El Dahan and Sven Schlüsselburg who took the lead on Friday after the first round with a score of zero. However, in this second part of the event, the Saint-Tropez Pirates who had been close on their heels the day before, did not let them taste victory! The bouncy Vivaldi de Meneaux (Chippendale Z) continued to prove his wild form with his pilot Olivier Robert by achieving a zero. It was the same scenario for his Israeli teammate Dani G.Waldman, associated with Queensland E (Quickfire de Ferann). The duo won this sixth stage of the circuit!

In front of his French public, Olivier Robert said: "It's incredible to win here, at home, in Paris. Being the last to leave, I had a lot of time to watch the course. Contrary to what people think, it's not that easy to get this place because of doubts over two or three little things. At the beginning of the competition, I went back to the stables to have a moment alone with Vivaldi... and then we went back and finally everything went perfectly this afternoon." In the general ranking of the Global Champions League after this sixth stage in Paris, Valkenswaard United holds first place, just ahead of Shanghai Swans and Monaco Aces. Thirty-five riders got their ticket for the Grand Prix which started at the beginning of the evening. From the outset, Gregory Bodo's course proved technical, even complicated for some pairs. Placed at number four, a wall representing the Arc de Triomphe caused some damage at the beginning of the track. A vertical in number eight placed in front of the door was also problematic... On this course, there were potential mistakes at every place! The first clear round appeared when the seventh pair, Rodrigo Giesteira Almeida and GB Celine (Cardento 933) entered the arena... a clear round but with one time fault something which caught many other riders out as well. Rodrigo Giesteira Almeida et GB Celine, with the famous number four, came fifth in the event with only one time fault.

The first perfect score came from the twelfth rider, Ben Maher and his 10-year-old mare Ginger-Blue (Plot Blue). Very few riders followed suit but his young British compatriot, Jodie Hall McAteer matched his achievement with her remarkable Salt'n Peppa (Stolzenberg). Aged 20, she was the revelation of this event, conquering the hearts of the Parisians! Only the Egyptian Sameh El Dahan, associated with WKD Aimez Moi (Je T'aime Flamenco), then achieved a clear round to face the British in the jump-off. On the French side, Olivier Robert might have hoped for a dream day but an acrobatic fault on the last oxer of this course stopped him at the gates of the jump-off, still riding Vivaldi des Meneaux. Ben Maher was the first to start the second part of the competition and he achieved a double clear, putting the pressure on his two competitors. When Jodie Hall McAteer then entered the arena, the public did all it could to carry her towards a clear round, all delighted by this young rider. Unfortunately, a refusal and a pole deprived her of the victory, which brought her down to the third step of the podium. Sameh El Dahan knocked only a single pole, and took second place just behind Ben Maher who kept the lead! It is worth noting that with his two horses, Ginger-Blue and Explosion W (Chacco-Blue), Ben Maher has already managed to win two Grand Prix since the resumption of the Global Champions Tour 2021!

"I really am a lucky man. It's great to have several horses capable of winning such events. The mare doesn't have too much experience at this level yet for her age. This win is the reward for all the work my team has been doing for quite some time. She fought well for me in the first round and is a naturally fast mare. By starting first in the jump-off, I took some measured risks but enough to put pressure on my opponents", Ben Maher said in summary at the end of the event.