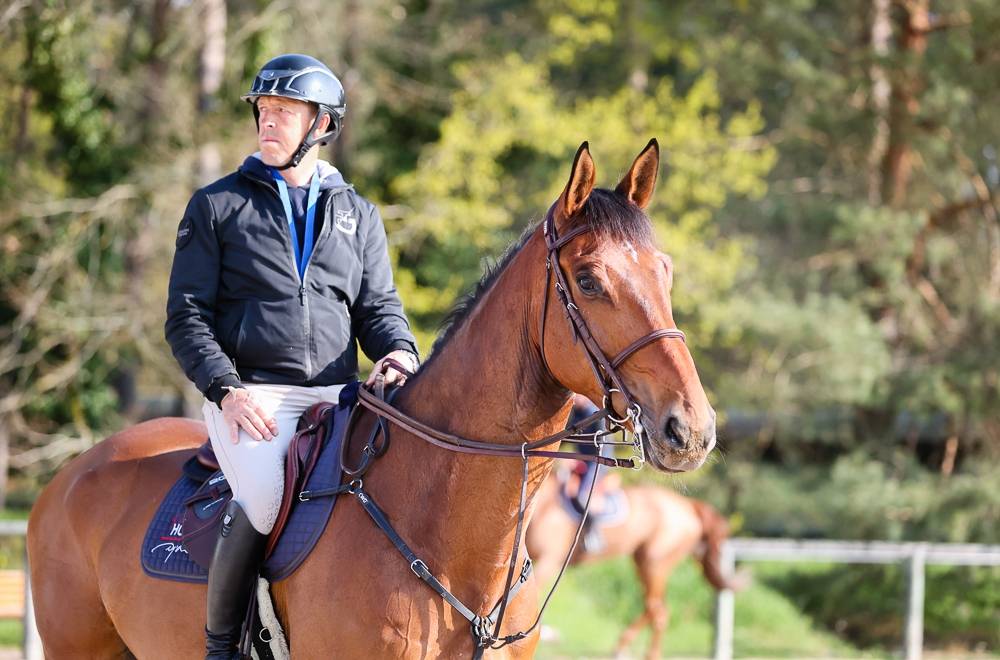 Amongst his team of top-quality horses, Rik Hemeryck particularly relies on the immense Inouï de Seigneur, a son of Jenson van’t Meulenhof and from an excellent maternal bloodline. Respectful, talented, agile and powerful, the bay seems destined for a brilliant future, and neither his rider nor his owner, Hérica Ravel, would contradict this! Encountered in Fontainebleau, where Inouï was taking part in the eight-year-old events, the two friends painted a portrait of their protégé, whose start was a little eventful.

Discreetly, but with great skill, Rik Hemeryck has patiently built up a stable of excellent horses, with the aim to return to 5* level. At Fontainebleau, on the occasion of the equestrian Printemps des Sports, ten days ago, the Belgian presented four of his horses. Morfine de Muze, a ten-year-old gelding who is touching the tip of his hoof to the highest level, the remarkable Navarro van Het Eelshof, a ‘little ball of magic’, the seven-year-old Pretty Girl de Lauzelle, and her senior by one year, Inouï du Seigneur. During the international young horses’ events, the latter caused a sensation, as he often does when part of a competition. Tall, powerful and respectful, the aptly named Inouï is at the start of a rich and successful career. 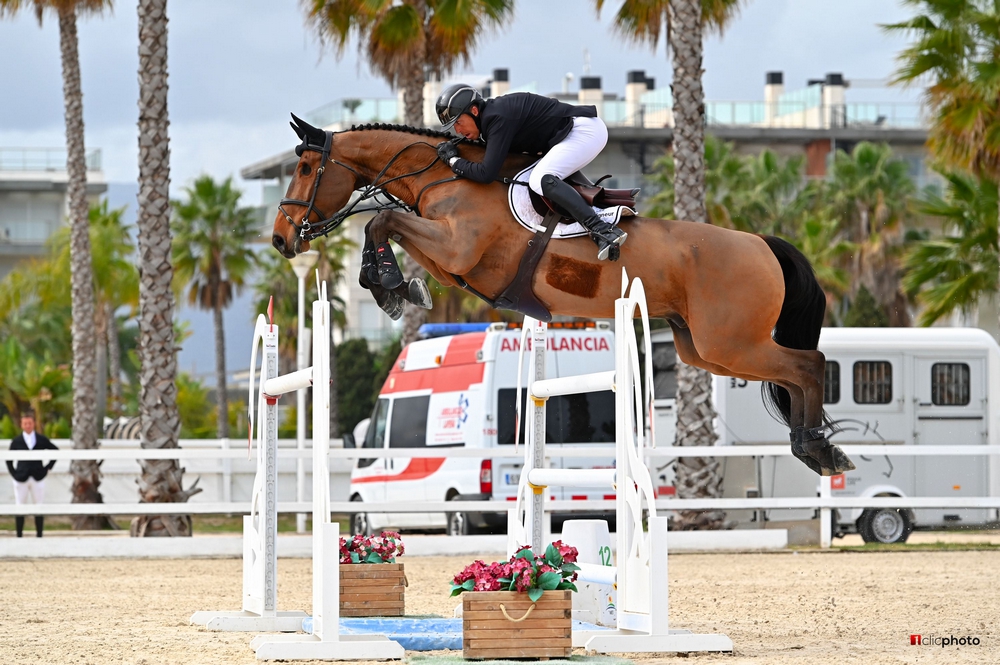 The property of Hérica and Thierry Ravel, both loyal supporters and above all friends of Rik, Inouï was born at the Seigneur Stud, in Honnelles in Wallonia. The BWP gelding is descended from a rich maternal bloodline, from which, for example, come the full brothers Tinka’s Hero Z and Gracieux du Pachis, both mounts ridden up to Grand Prix 5* level by Simon Delestre and Alexa Ferrer, or even Verdini d’Houteville Z.

“When I sold Aganix (du Seigneur, editor’s note) to Luc Henry (founder of the Hero stud, whose numbers were sent to auction at the end of 2020, editor’s note), we had agreed that I would have the right to one of his foals or an embryo. Then I saw Anaïs Hero Z, the mother of Inouï, when she was three days old. That’s how I acquired this interesting bloodline,” begins Marc Vanlangendonck, who produced Rik Hemeryck’s potential crack horse. “Anaïs’s dam, China Touch Hero, was ridden by Jérôme Guéry (and his wife, Patricia, editor’s note) up to 1m40. She lacked a small amount of means but had enormous qualities: she was very respectful and reliable. She was assigned to breeding and has produced many offspring, one of which is Acarat Hero, the full brother of Anaïs, and also Don’t Touch Tiji Hero, who was bought by Gudrun Patteet before being injured and becoming an excellent stallion. One of his more notable offspring is the stallion who covers the most at Zangersheide, Dourkan Hero."

Tested over poles as a two-year-old, Anaïs showed a great predisposition for the sport. As a good breeder, Marc Vanlangendonck decided to use this new bloodline to continue his work. The daughter of Aganix du Seigneur and granddaughter of Chin Chin was broken in then turned directly to reproduction. Then, in 2014, as a three-year-old, she produced Inouï, a son of the excellent Jenson van’t Meulenhof (Vagabond de la Pomme x Quidam de Revel), accomplice of Niels Bruynseels and from Qerly Chin’s formidable bloodline. “Inoui was a big foal, who also jumped well at liberty as a two-year-old,” remembers his breeder. “He was always very, very nice. His mother has an easy character, and so does his sire, Jenson, who passes on his pleasant temperament to his offspring.” 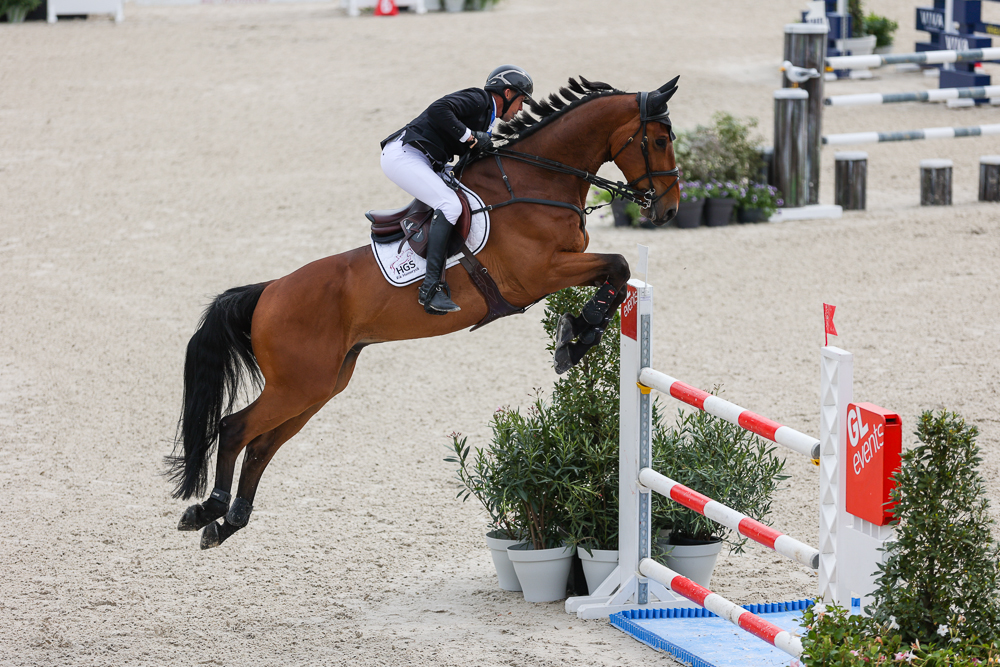 After suffering an eye injury as a two-year-old, Inouï was entrusted to Virginie Thonon, for evaluation. “The fact that Inouï is one-eyed only underlines to advantage his qualities, especially when one takes into account his current results. However, at that time I didn’t know if I could market him properly. So I gave up a share in him to Virginie, proposing that she should invest in working him in exchange, a plan that worked very well. She rode him when he was five and six, then at the start of the following year,” adds Mark Vanlangendonck. Not brought out as a four-year-old, Inouï began his career in 2019, when he took part in the national championships for his age category, at Gesves in Belgium. After completing a few courses as a six-year-old, the pair made their international debut in 2021 with a clear round at Oliva. At the moment, Rik Hemeryck has this big bay of 1m70 just where he wants him.

“I was at Oliva for several weeks, for a competition. Inouï was then seven. I had already noticed that he jumped strongly and well. So I watched him with more attention in the classes which he took part in and I saw that he was out of the ordinary,” details the friendly Belgian, when met in Fontainebleau, just before the CSI 4* Sunday Grand Prix. “I immediately called Hérica to let her know that I’d discovered a good horse. After the second weekend of the tournament, I tried Inouï. The sensation was indescribable. I started to jump and straightaway he was giving a metre to the fences.” Seduced and charmed, Hérica and Rik didn’t hesitate for a single second and acquired this new star. 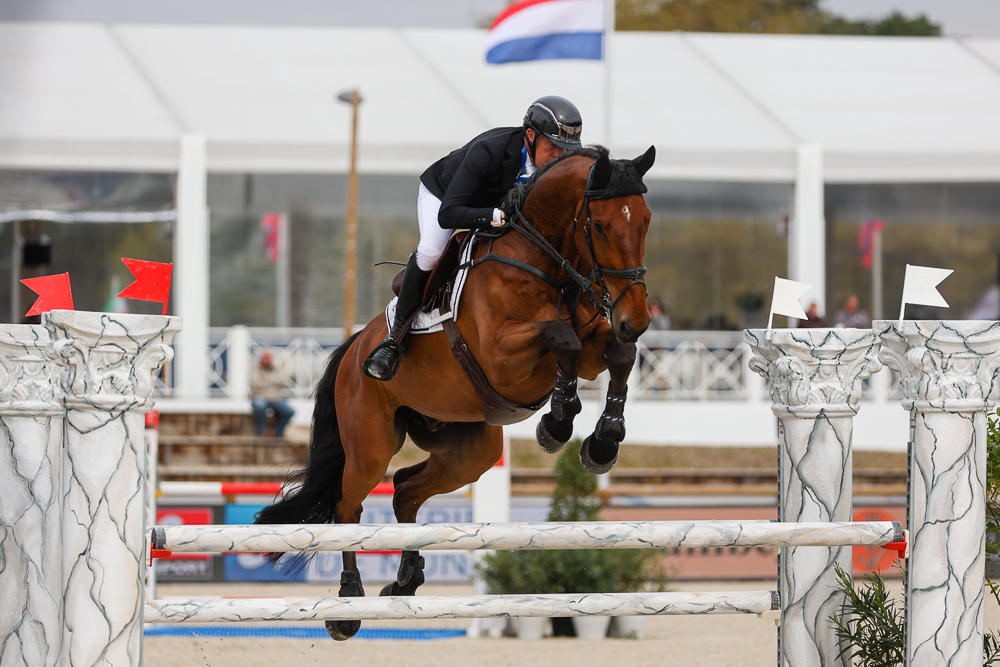 The adventure between these two began a few years ago, thanks to a certain Ulyss Morinda, the coloured stallion Hérica bred herself who has been a winner in Grand Prix up to 4* at 1m60. This first good experience has led to others. “With Rik, we’ve passed the stage of just a rider-owner relationship. It’s now a question of human relations, of friendship. Anyway, my horses would never go to another stables, for certain. I was looking above all for someone who was kind to his horses, which is a sine qua non condition for entrusting my protégés. I’ve spent my whole life with horses and have myself ridden in competitions up to 1m40 and it was out of the question to have recourse to barbaric training methods. At Rik’s, in Wavre, our horses are happy. They are brought up with sweets and carrots (she laughs). Rik works them himself and spends hours training them, which is not always the case. The results follow, but we are only at the beginning,” assures Hérica.

As far as the Olympics?

Strength, respect, courage; Inouï has inherited the qualities that Marc Vanlangendonck perceived in his mother, Anaïs. “When we start jumping, he flies over the obstacles,” his rider says with a smile. “He does so with immense ease.”

“And he is very respectful,” adds Hérica, who has also produced a cross between Jenson van’t Meulenhof and a young and promising daughter of Aganix du Seigneur. “When he starts work, Inouï is very calm, then, as you jump, he becomes hotter and hotter, as though his turbo has kicked in,” continues Rik. “In hand and on the flat he has a superb and easy character. He loves to just go for a hack, so often, he starts his sessions with a half hour hack before working in the school.” 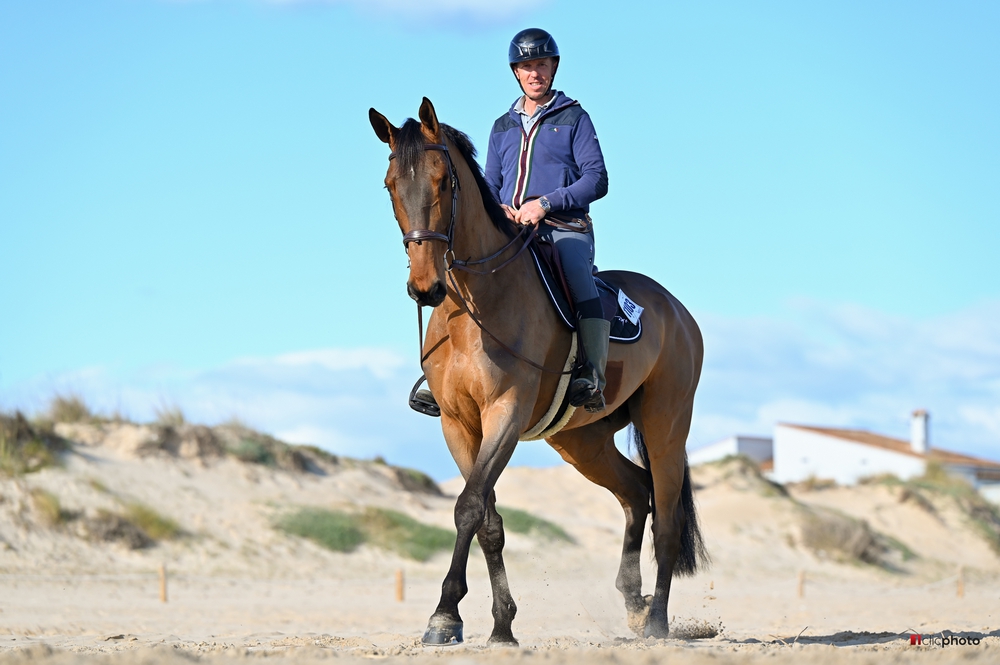 Kind and steeped in qualities, Inouï nevertheless had a difficult start. “When he arrived with us, he was very hot, even violent, so much so that one day I said to Rik ‘what did we buy here?’. He could rear twenty times in two circuits of the school in a trot, then go off bucking, doing U-turns and leaping in the air off all four legs like a sheep: the whole shebang. He knew how to do everything,” jokes his owner. But, thanks to the care at the Hemeryck-Godart stables, the big bay found his equilibrium. He’s been able to spend a lot of time out of doors in the paddock and has calmed down and matured. He has also acquired experience in the one year plus he’s been with his rider. Not put off by complicated horses, Rik knew exactly how to behave with this son of Jenson van’t Meulenhof, in order to channel his passion and get the best out of him.

In competitions, the duo quickly made their mark. “I have been training him gently. We’ve taken part in classes just for seven-year-olds over the last year. In September, he was third in the seven-year-old’s Grand Prix at Mauberge, over a 1m40 course, then, straight afterwards, second in the seven-year-old finals at Oliva, only a few hundredths of a second behind the winner. At the start of the year, he contested his first ranking event in Oliva, where he produced a clear and finished eighth. Fontainebleau was a good course for continuing his development. His eighth year is still designated for training, but I think that within a month or two he should begin to do a few 2* Grand Prix,” predicts his patient and hard-working rider.

If the partnership was foiled in the YH Grand Prix jump off at Bellifontain by knocking over a post in the way, Hérica and Rik know better than anyone that the future consists of preparing quietly and not hurrying. Like Cornado NRW, Tornesh, or more recently, Django Ste Hermelle, Inouï du Seigneur makes one forget his physical differences because of his great qualities. So much so that his rider doesn’t rule anything out. To the question, “What do you wish for the future?”, the Belgian replied immediately, “The Olympic Games!” If not those in Paris in 2024, Inouï will still be able to seek selection for Los Angeles in 2028, the year when he’ll be fourteen. “His greatest quality is his respect for fences. It’s the most important thing,” emphasises Rik. “He is big, but very agile and he possesses the means. Now, we have to move forward gently.” Let's get on with it! 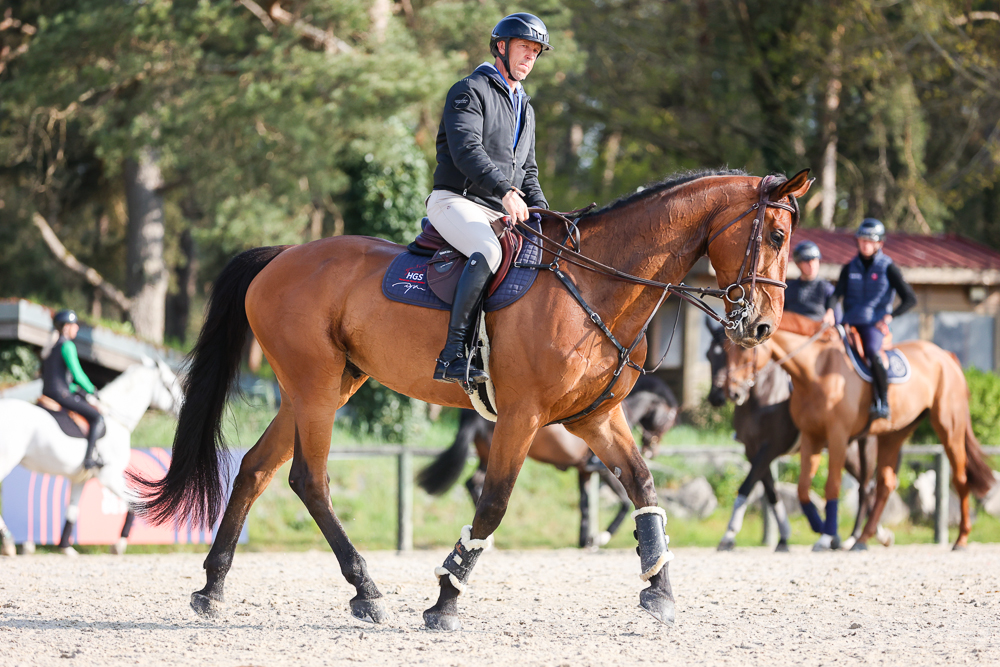