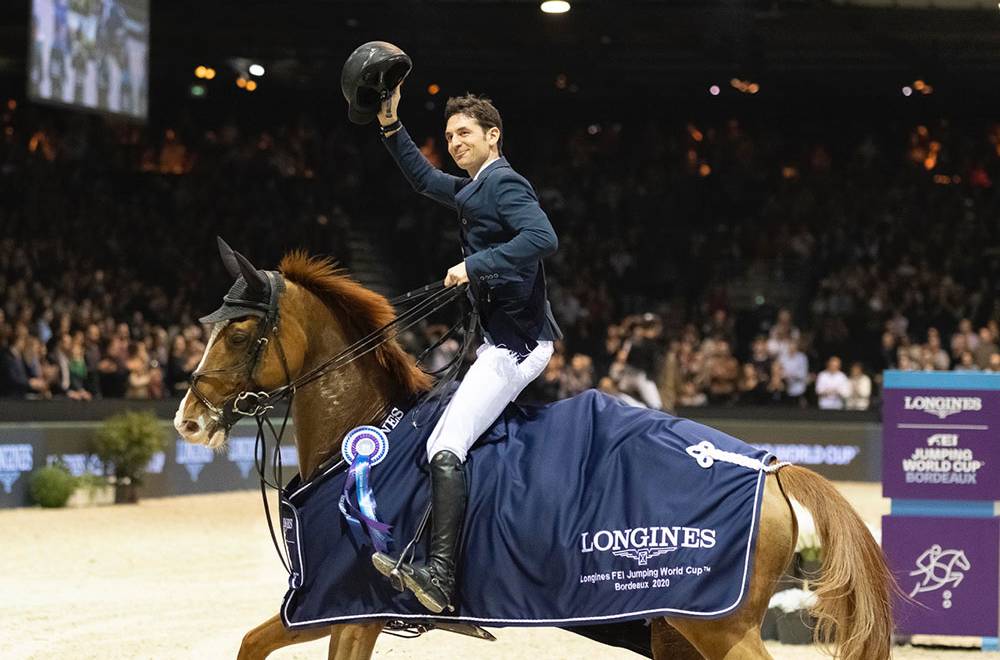 Winning the World Cup in Bordeaux is always a special moment in a rider's career: it adds his name to a famed list of the greatest athletes of the discipline from the past 45 years. Today, it is the prestigious name of the World No. 1 rider, Switzerland's Steve Guerdat, who has just been added to this famous list of winners. A victory that tops off one of the most thrilling competitions on the calendar, one that deserves the Oscar for the best screenplay!

This penultimate European stage had several things at stake. For exactly ten riders, the aim was to collect enough points to enter the top 18 potential qualifiers for Las Vegas (some came close), and for a few French riders, the challenge was to show their national coach their ability and competitiveness at the start of this Olympic year (which Roger-Yves Bost demonstrated once again on Saturday evening). For others, it was just a question of honor: the honor of winning an event that looks pretty cool on a business card! Despite a dazzling record of achievements, being the World No. 1, three-time World Cup winner and Olympic Champion, Steve Guerdat was part of the latter group, the group of those that had not yet won this World Cup Grand Prix in Bordeaux. It's done now, and what a win it was! With Victorio des Frotards (Barbarian), a horse born in the Nouvelle-Aquitaine region - a homecoming - the Swiss champion won the jump-off by 77 hundredths of a second, coming in ahead of last year's winner, German rider Daniel Deusser (Jasmien v. Bisschop (Larino)). The Belgian rider Niels Bruynseels, completed this wonderful podium with a rather special horse, Ilusionata van 't Meulenhof (Lord Z), that he can't warm up beforehand: "They bring him to me just before entering the arena, I hop on and off I go!" The best placed Frenchman, Roger-Yves Bost (Sangria du Coty (Quaprice Bois Margot)), achieved a very nice fifth place.

Steve Guerdat is one of the greatest champions of all time. He has won almost everything on earth, and yet this victory in Bordeaux was more important to him than anything else: "Bordeaux has always been a competition that fascinated me, one that I've always loved. The French public, and especially the Bordeaux public, is always fantastic. There's something mythical about this competition for me. For example, I always watch the video of Rodrigo's (Pessoa) victory with Baloubet (in 2004, editor's note). I've always dreamed of winning this World Cup Grand Prix, but for the past ten or twelve years, luck has never smiled on me and I’ve always left Bordeaux disappointed on the Sunday evening." Nevertheless, Steve Guerdat has made several podiums in Bordeaux, but a great champion only remembers the victories! He is the biggest fan of this sport, whose values he defends fervently, and of these venues with their amazing audiences, and of his horses - his universe - which he worships and respects with passion. Victorio is a special horse (but each of his horses is special), after a complicated start, the horse from Nouvelle-Aquitaine won the first three 5* Grand Prix’s in which he took part, a unique feat: "We bought this horse with two friends of ours, and at first, we had our doubts. I really wanted it to work between us, but I couldn't find his jumping intelligence and the fighting spirit he had with his previous rider. There was a lot of disappointment in the beginning, but now he's really giving it his all. There was a real click at the beginning of the year, which took a load off my mind. I was right to buy him, but it took a lot of patience and now he fights for me and really enjoys it. We have a lot more fun together now." When Steve Guerdat rides his horses or talks about them, a broad smile appears on his face. Tonight, the Jura rider was beyond happiness.