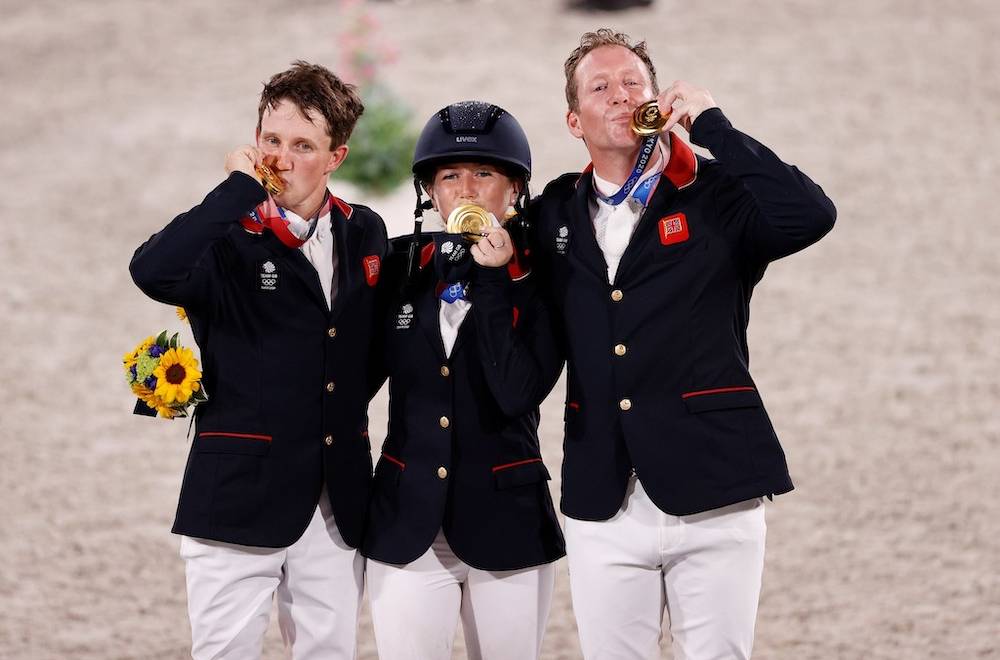 At the end of the final jumping test, Great Britain continued on its way and secured itself team gold. The individual podium was dominated by German rider Julia Krajewski, who was surprised and moved at the reins of her mount, Amande de B'Néville.

"There'll be a big celebration. I don't think it'll be with a cup of tea," Townend said after Great Britain’s team gold medal at the Tokyo Olympics. Having dominated the competition since the dressage test, the British had secured a fairly comfortable lead over their Australian pursuers to secure the top step of the podium, despite Laura Collett’s rail that she had down with London 52 (Landos), and Oliver Townend’s four faults with Ballahgmor Class (Courage II). With the magnificent clear round from Tom McEwen and Toledo de Kerser (Diamant de Semilly), Great Britain won by almost 14 points ahead of Australia. The result is a team gold medal, which the riders from across the Channel hadn’t won since 1972!

While the die seemed cast for the first step of the podium, the silver and bronze medal positions were very close at the end of the cross-country. Australia defended its second place magnificently thanks to perfect runs by Kevin McNab and Don Quidam (Quidam) and Andrew Hoy and Vassily de Lassos (Jaguar Mail). Despite Shane Rose and Virgil’s (Vivant) four faults, Australia came in 1.3 points behind the French who secured the bronze. France also handled the pressure wonderfully well to secure their place on the podium. Although Karim Laghouag couldn’t avoid a rail with Triton Fontaine (Gentleman IV), Nicolas Touzaint once again showed his status as a pillar of the French team by only being 0.40 points over time on Absolut Gold (Grafenstolz). Less experienced, Christopher Six and Totem de Brecey (Mylord Carthago) also played a large part in securing the medal by leaving the arena without penalties. Christopher Six and Totem de Brecey had an incredible championship! For their second major event in the French team, the pair showed they had strong shoulders to snatch the bronze medal with their teammates. © Sportfot.com

And though the podium wasn’t shaken by the last test, when it came to the rest of the rankings, the nations in contention were at loggerheads. New Zealand and the United States each dropped one place to the benefit of Germany, which finished just below the podium. After a dark day on the cross-country course, the German clan found their footing today in the Baji Koen stadium thanks to clear rounds from Sandra Auffarth, Michael Jung and Julia Krajewski! They posted perfect rounds, which didn’t erase the bitterness of the chocolate medal, but which placed the rider of Amande de B'Néville at the top of the individual rankings.

There was barely enough time to recover from the emotions of the team championship, before the 25 best combinations were called back for a final show jumping round. There was just one objective: the individual podium. Was it the change in light, the cumulative fatigue of the horses or the construction of the obstacles that made this last test so delicate? The clear rounds were rare... and were worth gold, or almost! Oliver Townend had a rail down and was a bit over time which relegated the World No. 1 to fifth place, just behind Japan's Kazuma Tomoto. Riding the Selle Français Vinci de la Vigne (Esterel des Bois), the Japanese rider rode a perfect final round, marred only by going a small second over time, which allowed him to finish just below the podium. What a moment of pride for this rider, the only Japanese representative in this individual final, to conclude these Olympic Games at home over such a well-designed course.

Just ahead, Andrew Hoy also rode perfectly (and within the time) on Vassily de Lassos, who has always been particularly comfortable in the jumping test, to win the bronze medal. Having been noticed at the World Equestrian Games in Tryon, Tom McEwen and Toledo de Kerser showed that they have the makings of becoming one of the best championship combinations. Elastic and bouncy, the son of Diamant de Semilly benefited from the fair riding of Tom McEwen, who, at the age of 30, added a silver medal to his team gold for his first Olympic Games. In the end, it’s always Germany that wins!

Though Michael Jung didn’t achieve the Olympic triple that everyone was dreaming of, Germany still won the individual gold for the third time in a row. After the King's victories in London and Rio, Julia Krakewski made the German anthem ring out again today in Tokyo. Impressive since the beginning of the championship with Amande B'Néville (Oscar des Fontaine), and having ridden a breathtaking cross-country round, the rider was able to concede just 0.40 points to her competitors over the final course, which was synonymous with the top step of the individual podium. It was a nice comeback for Julia, who had to face the premature retirement of her star mount Samurai du Thot this year and who, without the withdrawal of Ingrid Klimke, would certainly not have even participated in these Tokyo Games. It was also a very good performance from Amande de B'Néville, who was certainly a hit at each of her outings since 2020, but who, at 11 years old, had no experience at championships until now. Her energy and her will, so well managed by the German rider, allowed Julia Krajewski to enter the history books of the sport. Not just because an Olympic title is set in stone forever, but also because she became the first female gold medalist at the Olympic Games for Eventing. In this discipline that is dominated by the female gender at the major championships, never before had a woman been crowned with the Olympic gold, and now it has been done. Breeding enthusiasts will note the amount of Selle-Français horses in this final. Amande de B'Néville, from the same breeding as Piaf de B'Néville (the team gold medalist and individual silver medalist under the saddle of Astier Nicolas in Rio) and bred by Jean-Baptiste Thiebot was certainly the best representative of the French studbook at this championship, but was not the only beautiful showcase of French breeding. Toledo de Kerser, Vinci de la Vigne, Absolut Gold, Totem de Brecey and Triton Fontaine are all Selle Français, and all finished in the Top 12 at these Olympic Games. And that's without counting the third place of Vassily de Lassos, an Anglo-Arabian, who is another excellent representative of French breeding know-how.

Featured photo: Leading since the dressage, the British gave their opponents no chance in the team championship. ©FEI/EFE/Kai Forsteerling