Bingo for Daniel Deusser in Valkenswaard 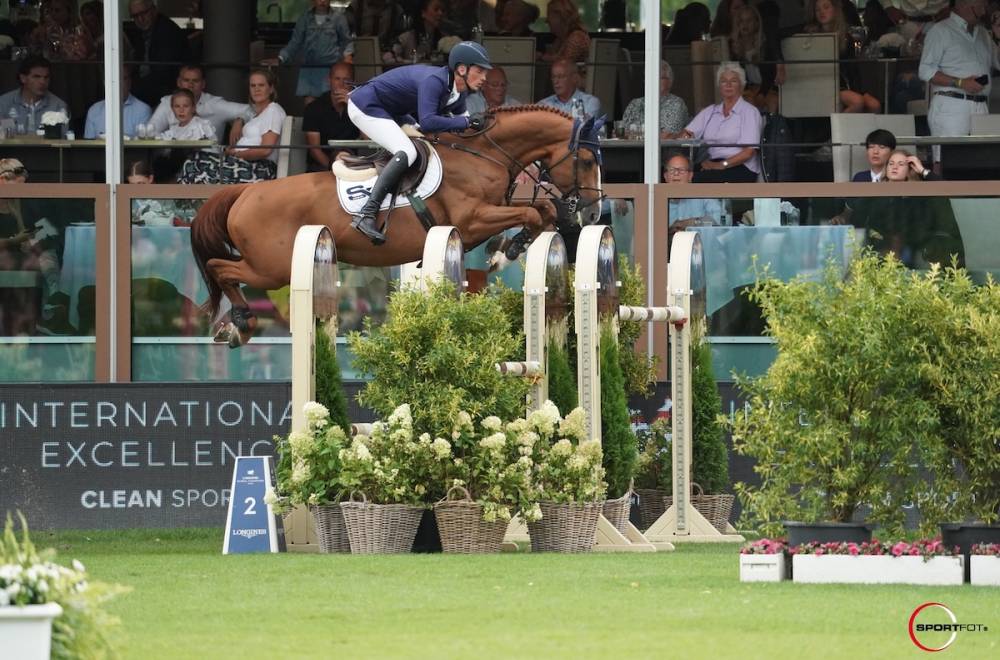 With three CSI 5* events on the program, and plenty of 3* and 2* competitions around the world, the riders had a lot to do this weekend. At the highest level, World No. 1 Daniel Deusser held his own in the GP5* in Valkenswaard.

World No. 1 for the third consecutive month in August, Daniel Deusser held his own by winning the Longines Global Champions Tour GP in Valkenswaard on Saturday. Partnered with Bingo Ste Hermelle (Number One d'Iso), the German rider deprived the young Sanne Thijssen of a second victory at the highest level, after his victory in Rotterdam a few months ago. Riding Con Quidam RB (Quinar), the Dutch rider achieved a double clear round, fast enough to beat Edwina Tops Alexander and Fellow Castlefield (Je T'aime Flamenco), who complete the podium.

Angelstone, in Canada, also hosted a 5* competition. With eleven qualified pairs, the jump-off was on a knife’s edge, until the Israeli rider Daniel Bluman partnered with Ubiluc (Ubiko) was victorious with a few hundredths of advance. A fine revenge for the rider who had been deprived of the Olympic Games in Tokyo due to a registration issue connected with the nationality of ownership of his mare Gemma W (Luidam). Daniel Bluman was the only rider to achieve a jump-off time under 37 seconds, ahead of Shane Sweetnam with Karlin van't Vennehof (Fantomas de Muze) and Briane Goutal-Marteau with Viva Colombia (Couleur Rubin). In Valencia, the French riders gave no chance to the foreign competition in the 5*GP. All the steps of the podium were occupied by French riders despite a field of some of the best riders of the moment. Gregory Cottard, the first to start the jump-off, was sure that he would win with Bibici (Norman Pré Noir), but he finally lost to Olivier Perreau and GL Events Venizia d'Aiguilly (Diamant de Semilly). The podium was completed by Simon Delestre and Hermes Ryan (Hugo Gesmeray). In front of their audience, Olivier Perreau and Venizia d'Aiguilly particularly enjoyed their victory in Valencia 5*GP ©Hubside Jumping Valence

In Norway, Drammen hosted a CSIO3*, supporting a Division 2 Nations Cup on Friday. While Ireland, with a total of four points at the end of the two rounds of the team competition, achieved a clear win. The rest of the teams in competition had a hard time separating themselves. In the final outcome, France, Australia, and Belgium were all tied for second place with eight penalty points.

In Sunday's Grand Prix, there was no hesitation in deciding the winner. The fastest double clear round by far was achieved by the British rider Simon Buckley with Elia (Heartbreaker) ahead of Sweden’s Wilma Hellström/Cicci Bin (Ci Ci Senjor Ask) and Australia’s Hilary Scott/Oaks Milky Way (Clearway).

Across the Channel, the GP2* in Bolesworth saw the home victory of James Smith, who achieved one of the two double clear rounds of this event, partnered with Simply Splendid (Ustinov). Slower, but just as agile over the bars, the Irish rider Jenny Rannkinn climbed to the second step of the podium with Carmela Z (Candillo 3), ahead of William Whitaker and Galtur (Cornet's Stern).

Finally in Spain, the CSI2* in Gijon ended with the victory of the local rider Kevin Gonzalez De Zarate/Conthargos Rouge (Conthargos) ahead of the Brazilian rider Pedro Veniss/Balada de Colores (Baloubet du Rouet) and the Portuguese rider Hugo Tavares/Cicero 117 (Berlin).

Under the saddle of Mathieu Laisney, Frenchcornet d'Odival won the coveted title of French Champion of the 6YO D. The bay did not knock a single bar during this final and won thanks to his consistency bonus during a perfect season (10 clear rounds). Born at Pascal Sauvage's, who remains the owner, the son of Cornet Obolensky has made an exemplary start to his career. He was sixth in the 2-year-old males, second in the 3-year-old males, referred to as "Elite" in the 4-year-old final and 3rd in the 5-year-old criterion. Not a single bar knocked this season for Frenchcornet d'Odival, who was crowned French Champion of the 6YO D category under the saddle of Mathieu Laisney ©Agence Ecary

As usual, the 5-years-old D category was the most disputed with a little more than 120 pairs at the start line. There was not one but two champions as Griffondor Dream Dei (Sioux du Godion) and Guinness Ar Tur (Syriac) finished on equal points at the end of the two rounds, under the respective saddles of Noemie Wagner and Karen Baizid. Both started with a 3 pts consistency bonus. Then they both went double clear, scoring 15 in dressage and 16 in style.

Julie Mestrallet's St Hymer breeding farm was honored in this event. Firstly, because Hellomyqueen St Hymer (Movie Star Tilia) was crowned Champion of the 4YO D under the saddle of Rosalie Lefebvre, but also because Opplala St Hymer is the father of the vice-champion, Hines du Ruisseau, whose own sister Fleole du Ruisseau was second in the 6-years-old, and of the seventh, Helf du Ruisseau. A great success! Led by Sophie Maurocordato, Hwen D'O Vezauziere (Laudator*SL) also found a place on the podium.