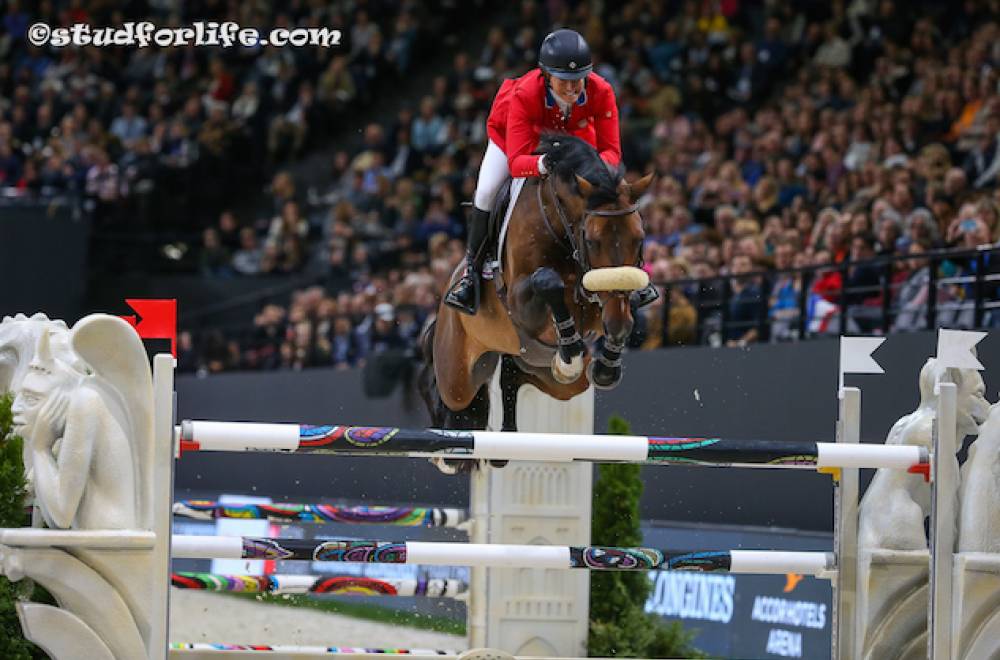 On a day full of surprises at the 2018 Longines FEI World Cup Jumping Final, there was one constant element, and her name was Beezie Madden. The American rider didn’t just maintain her overall lead aboard Breitling LS, she strengthened it, jumping foot perfect and will go into Sunday’s Jumping Final III with a fence in hand, and a certain peace of mind.

“It’s always nice to have a rail in hand, but we’re only halfway through,” Madden said. “We’ve done two rounds and a jumpoff, and we might do that again on Sunday. So, a lot can change. I just hope my horse stays on good form and I stay on good form.”

On Friday, April 13, 2018 Jumping Final II—a classic round with jumpoff—supplied plenty of hair-raising moments over Santiago Varela’s 1.55m – 1.60m course Overnight 2nd placed rider, Daniel Deusser with Cornet D’Amour, picked up 14 faults and Cornet took a hard look at the first element of the double on course, forcing Deusser to pull up inside the combination. Marcus Ehning’s Cornado FBW also picked up 12 faults, moving him down the class rankings.

Steve Guerdat also suffered some bad luck, when Bianca lost her power going into the triple combination, forcing the former World Cup Champion to pull up and have another go at the fences.

But there was plenty of good news for plenty of others, especially those nine who made it into the jumpoff. Jamie Barge of the USA stepped up to place 6th with Luebbo, and Kevin Staut of France had a redeeming day with his second mount Silver Deux de Virton HDC to place 5th. Olivier Philippaerts was 4th for Belgium for H&M Legend of Love.

Into the top three, Sweden’s Henrik von Eckermann is very close to the position he was in at last year’s final with Tovak’s Mary Lou. He placed 3rd in Round 2 and is sitting in 4th place in overall standings. While Harrie Smolders delivered a strong performance with Emerald to place 2nd in Round 2, his overall 16th place ranking leaves him with an outside chance for a podium placing.

“Zinius had a very good indoor season and he’s also naturally fast, especially in a speed class, so that’s why we made the decision,” Smolders explained. “Ok, it didn’t work out like we hoped, but I must say, Emerald jumped fantastic today. He was very feisty, but he had a lot of fighting spirit.”

In Round 1, Smolders picked up faults with his other mount Zinius, and while he admitted that hindsight is 50/50, he was happy with Emerald’s performance.

And it’s the overall ranking that matters most at the moment, although Round 2’s prize money of 250,000 was helpful for those who rode strongly today. Six pairs went clear in Round 1 only to suffer a time fault that kept them out of the jumpoff, demonstrating the importance of keeping on pace all the way through the finish timers.

With the top 30 coming back on Sunday for two rounds after a day of rest, the overall ranking has remained the same over Round 1 and 2 of this final. Madden, Deusser, Devin Ryan—who is giving a banner performance with Eddie Blue at his first World Cup Final, especially as he is mounted on the youngest horse of the competition—and Ehning rank 1st through 4th going into Sunday.
Carlos Lopez of Colombia turned heads with Admara overextending behind over every single fence of Round 1. The mare jumped clear but a time fault kept them out of the jumpoff.