AUCTION TOPPER FOR ALL STAR 5 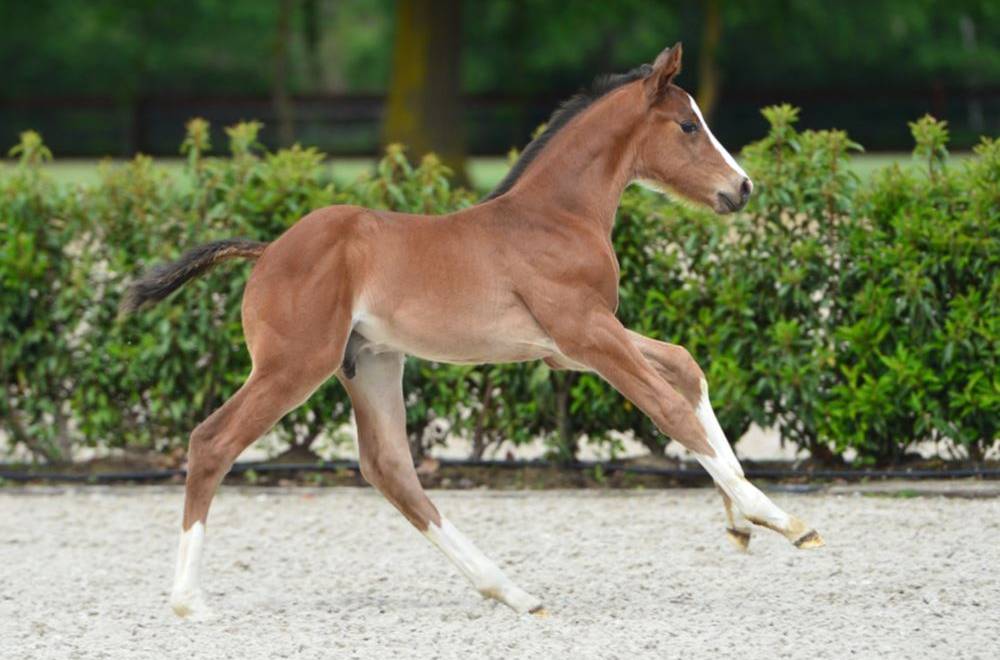 Tonight, closed the first Online Foal Auction of the season for Studbook Zangersheide. 17 foals were offered and sold for an average price of around € 12,000. After a particularly difficult period when the world was almost completely in lockdown, this is a real boost for many breeders and brings hope for better times!

Avatar vh Reukenis Z, bred by Stal Reukenis, is one of the first sons of All Star 5 and will find his new stable in Poland for an amount of € 22.500. Second most expensive was the Dominator Z daughter Dabria Cera R Z bred by the Belgian farm ‘Regenwortelhoeve’. Tokyo de Jolie Z (Taloubet Z), a grandson of Narcotique de Muze II, will move to Switzerland for € 14,500.

Zangersheide.Auction would like to thank the buyers for their unprecedented confidence in our Zangersheide breeding products, to which our breeders have devoted so much time, passion an energy!

And it doesn’t stop there: even before completion of the foal auction, Zangersheide.Auction can boast the launch of the next auction which kicks off on Saturday the 13th of June! Breeders will have unique opportunities to buy broodmares owned by Studfarm Zangersheide. Never before has Studfarm Zangersheide offered a collection of mares for sale at an online auction. All the more reason to highlight the offered mares:

Georgina Z is a 2-year-old daughter by George Z out of Ratina Alpha Z. Ratina Alpha Z is the eldest clone of Olympic medalist and Mare of the Century Ratina Z! Ratina Z herself is also dam of the world famous sport stallions Comme il Faut and Crown Z. Georgina’s sire George Z again, is a son of the other celebrity Usha van ’t Roosakker, and Georgina Z thus combines the lines of Ratina Z and Usha van ’t Roosakker in one unique mare!

Angel Eyes Z, sister of Take a Chance on Me Z with a foal by Brunetti Z and presently in foal by Dominator Z!

Angel Eyes Z is a daughter from a combination of two of Judy-Ann Melchior’s former top horses. Sire Aktion Pur Z was probably one of the most successful horses of the Global Champions Tour circuit and dam Abba Z also jumped at 1.50m level under Judy-Ann. Abba Z is also the dam of Global Champions Tour GP winner Take a Chance on Me Z (Taloubet Z)! Angel Eyes Z comes up for sale with a sporty colt by Brunetti Z at her side and has been inseminated again with semen from Dominator Z!

Charcolle Z, dam of approved stallions in foal by Solid Gold Z and for sale with a filly by Columbus Z at her side!

Charcolle Z comes from Piet Janssen’s breeding stud and is the sister of the 1.50m jumping Calano Z (Calato Z) and Zangersheide’s breeding stallion Cascol Z! Charcolle Z, together with Zandor Z, has already produced the exceptionally promising showjumper Zandycolle Z and she is also the dam of approved breeding stallion Souplesse Z (Solid Gold Z). Charcolle Z comes up for sale with a beautiful filly by Columbus Z at her side and meanwhile has again been inseminated by stallion Solid Gold Z! So, a full brother to Souplesse Z will be born in early 2021.

Talou’s Dame Z is a unique mare! She is not only a daughter by Taloubet Z who has earned over two million Euros in prize moneys during his career, she is also the eldest daughter of no one else than Grande Dame Z! Grande Dame Z has an impressive track record: under Jan Tops’ direction, this black mare can boast wins like for instance the World Cups in Oslo and Bordeaux and the Nations Cups in Rotterdam and Luzern! Later, Judy-Ann Melchior took over the reins and the pair excelled in the Nations Cups in Falsterbo, Lummen and the World Cups in Mechelen and Stuttgart, just to name a few! Talou’s Dame Z will be sold with a high-blooded colt from our promising Dourkhan Hero Z at her side and the sale includes the insemination by a Studfarm Zangersheide stallion of your choice!

Araconda Z was purchased at the Z-Quality Auction in 2013. She is a daughter of Nick Skelton’s great winner Arko III out of a Carthago Z mare. Before, the dam Caraconda ST Z gave birth to Alex Duffy’s Quiraconda ST Z and the approved stallion Lethago Z (Levisto Z). Araconda Z will be sold as a broodmare and the sale includes the insemination by a Stud farm Zangersheide stallion of your choice!