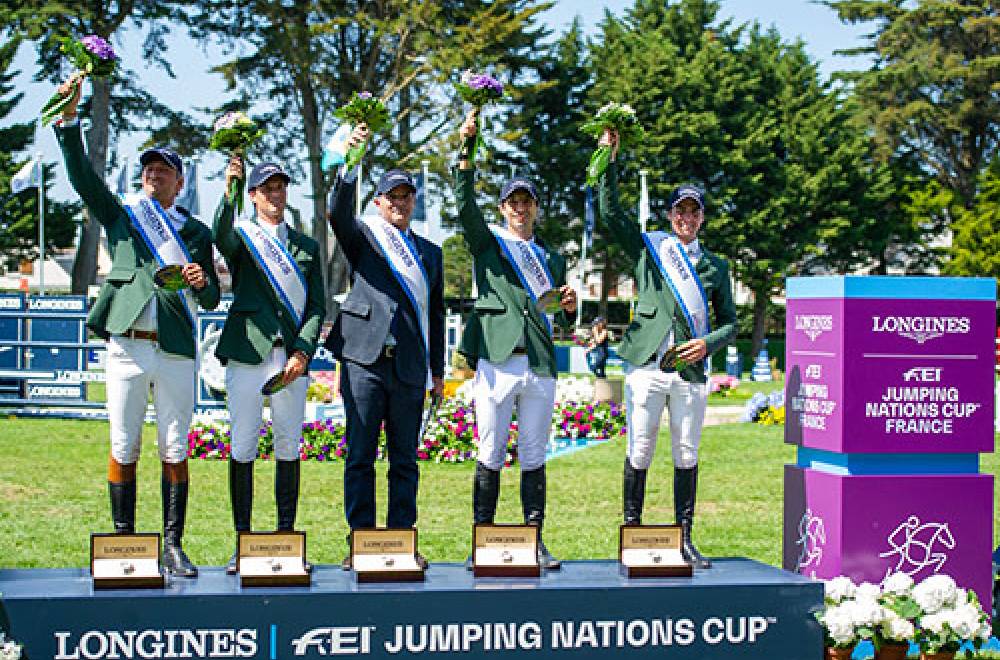 It took nerves of steel for anchorman Pedro Veniss to clinch the honors for Brazil at the Longines FEI Jumping Nations Cup™ of France in La Baule, France on Sunday, May 20, 2018. In a contest that came right down to the very last ride of the afternoon, he had absolutely no room for error if he was to give his country an historic first-ever win at the Francois Andre Stadium in the beautiful French seaside town, and pin Europe’s elite into the minor placings. But partnering the fabulous 14-year-old stallion, Quabri de l’Isle, he produced a super-cool clear that left the 2017 series champions from The Netherlands in runner-up spot and Switzerland into third.

Veniss admitted he was feeling the pressure when last into the arena, but he knew he could rely on his horse. “Quabri is my very best friend, he has so much scope and always tries his best for me - that’s the greatest feeling in the world!” he said. The pair have a spectacular track record, having been on the Brazilian sides that finished fifth at the Alltech FEI World Equestrian Games™ 2014 in Normandy, fourth at the Pan-American Games in Toronto (CAN) in 2015 and fifth at the Rio 2016 Olympic Games.

Team spirit played a big part in the Brazilian success story, but, just like the Swiss who won the first Europe Division 1 leg in Slovakia three weeks ago, things weren’t looking altogether optimistic for them earlier in the week. Veniss' first choice horse was unable to compete and then Felipe Amaral’s ride came down with an allergy so he also had to change mounts.

But there’s a sense of rising momentum in the Brazilian camp, and Yuri Mansur’s exciting 10-year-old, Vitiki, provided a major boost when clear in the first round in which both Veniss, and Luiz Felipe de Azevedo Filho riding Chaccomo, collected just a single time fault to leave their country out in front at the halfway stage carrying just two faults. Amaral’s replacement ride, the inexperienced Germanico T, provided the drop score in both rounds.

Mansur’s Vitiki has literally come along in leaps and bounds over the last few months. “I bought him in October and he only jumped his first 1.30m track in November and now he has won the Nations Cup at La Baule - he’s developing so quickly!” said his delighted rider this afternoon.

It was a super-close finish, Brazil posting a final tally of seven faults with the Dutch on eight and the Swiss on nine. The Netherlands had the satisfaction of collecting the maximum points of the six Europe Division 1 nations chasing points towards the 2018 Final. And their anchorman and new World No. 1, Harrie Smolders (Don VHP Z), took a one-third share of the €50,000 bonus on offer for double-clear rounds along with Spain’s Manuel Fernandez Saro (Cannavaro 9) and Germany’s Maurice Tebbel (Chaccos S).

Spain chased the leading pack all the way to finish fourth on 12 faults, Germany lined up fifth with 14 and Ireland slotted into sixth with 17 faults. It was a disappointing day for the French hosts who had to settle for seventh with 20 faults on the board, while Team Canada lined up eighth and last on a 35-fault total.

Today’s result bodes well for the Brazilians who also finished an impressive second at the Longines FEI Jumping Nations Cup™ of the United States of America at Ocala (USA) in February and who now have the FEI World Equestrian Games™ 2018 in Tryon (USA) clearly in their sights.

For the Europe Division 1 teams however their next port of call is St Gallen on Sunday 3 June, where the host nation of Switzerland will be hoping to further boost their lead on the league table with another good result. That’s going to be a busy day of top sport as the third and final qualifier of the North/Central America & Caribbean League also takes place in Langley (CAN).